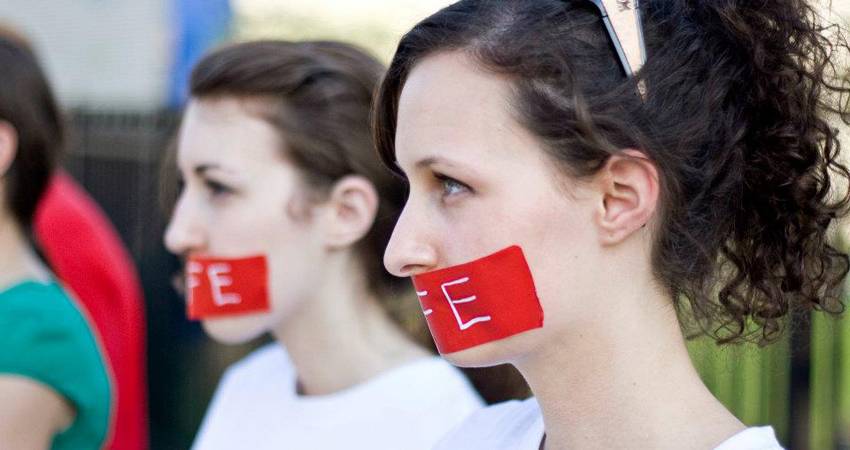 If it weren't for those pesky protestors

I recently attended the federal bench trial, Planned Parenthood Southeast Inc., et al v. Robert Bentley et al, in Montgomery, Alabama. Planned Parenthood is suing the state for passing a new regulation that requires all abortionists to obtain hospital privileges local to the clinics at which they perform procedures. This is how it went down…

MONTGOMERY, Ala. — As a peaceful pro-life activist, I spent a large majority of the federal trial, Planned Parenthood Southeast Inc., et al v. Robert Bentley et al, focused on keeping my face in a neutral position while my mind reeled from the lies falling out of so many pro-abortion mouths.That was extremely difficult. However, amidst my mental outrage, I also noticed a running theme throughout the testimony of Planned Parenthood employees, abortion clinic owners, so-called experts and undisclosed abortionists (the abortionists testified behind a screen). The message seemed to be this: The abortion industry would be absolutely thriving…if it weren’t for all those pesky protestors.

Now, some of that was simply the pretense of the savvy ACLU attorneys representing PPSE in this case. Both love a good round of dramatic overkill. (Did I mention the abortionists testified behind a screen?) But for someone who is familiar with the work of the pro-life movement in this state, you could look around the ridiculous theatrics and see some evidence of real progress on our side, and very real concern about that progress from the other side.

For example, “Dr. Mary Roe,” testified on the stand that she was aware of two abortionists who ceased to perform abortions in the state of Alabama due to pressure from pro-lifers.One abortionist in particular, “Dr. P7” they called him, was given the choice to stop doing abortions or possibly lose his job at his main Atlanta practice. Roe testified that the practice received a letter about P7’s Alabama moonlighting.

Roe, of course, made it sound like the letter was threatening. However, as that letter was crafted by my own organization, CEC For Life, and approved by legal counsel from Life Legal Defense Foundation before being sent to Dr. Ivan Diamond’s (P7) main practice, I can assure you there were no threats involved. The letter was cordial, articulate, and allowed time for a response.

That’s the part of the story I already knew. What I did not know, and what Dr. Roe testified to just after, was that she also worked at Diamond’s practice, and was simultaneously given the same sort of options regarding performing abortions. However, unlike Ivan Diamond, Dr. Hedwige “Didi” Saint-Louis (Roe) chose to quit the main practice in order to continue her abortion career unimpeded, as Associate Medical Director of Planned Parenthood Southeast.

While it is very unsettling to know a doctor would readily choose a career in destroying life over one in healing it, Saint-Louis went on to testify that, in regards to someone being able to some day take her place, “I have not met that person yet.” Despite her apparent dedication to the killing of innocent children, it seems she has yet to find a protégé to follow in her footsteps.Amazingly enough.

In fact, the great lament of both the abortionists and the clinic owners was that, if the current abortionists were unable to procure local hospital privileges, no one would step in to take their place.

Dalton Johnson, the owner of Alabama Women’s Center in Huntsville, stated it more plainly than anyone. After a long examination from ACLU, largely focused on revealing how pro-lifers first “forced” the clinic’s founder, Dr. Palmer, to move his abortion clinic into a building separate from his main practice, and then how pro-lifers later “destroyed” the main practice of Johnson’s current medical director, Johnson openly stated, “Our numbers are dwindling. We started in Alabama with twelve clinics.  Now we have five…I’m 14 years old, and I’m the youngest clinic in Alabama.”

Now keep in mind, the ACLU attorneys reiterated again and again and again that this decline in Alabama abortion clinics has everything to do with the “hostile” environment towards abortion in Alabama, and absolutely nothing to do with, say, abortionist Bruce Norman opening an illegal clinic in Birmingham, or abortionist Yashica Robinson-White recently being charged with Medicaid fraud, or abortionist Aqua Don Umoren being rewarded with a malpractice suit for performing an abortion on a woman with an ectopic pregnancy and rendering her infertile, or a nurse from Planned Parenthood Birmingham illegally selling abortion drugs out of the clinic parking lot.

It was very difficult, as the trial progressed, not to stand up and ask Judge Myron Thompson if I could take a crack at some cross-examinations, just for the sake of the pro-life movement – which, believe me, was the only group on trial in the minds of the ACLU attorneys.

I wanted very, very badly to tell Judge Thompson that the pro-life community of Alabama has not been “hostile” to anyone.What we have been are dedicated citizens who publicly request (on a somewhat regular basis) that the Alabama Department of Public Health do a quality job of protecting lives in Alabama, and that the abortion clinics in our state be held to quality standards. The fact that these facilities are unable to join in that mission does not show us to be hostile; it shows them to be repeatedly inadequate.

Of course, instead of addressing these issues, and possibly trying to offer some real evidence that Alabama abortion clinics provide good care, ACLU and PPSE decided, instead, to spend our tax dollars on extended testimony from people like Margaret Moore of the Feminist Majority Foundation, who ACLU presented as an “expert” in the “long campaign of violence and intimidation from the anti-abortion extremist movement.”Can anyone guess how many PhD’s this expert had? None. Yet the ACLU asked her to psychoanalyze anyone from David Lackey, a recently deceased Birmingham pro-lifer with absolutely no history of violence (who she named as a “high profile protestor”), to Scott Roeder, a violent criminal with no association with any national pro-life organizations at all.

“There is a path to violence,” Moore stated, “They’ll start out protesting…Then they’ll escalate.”Again, Moore has no educational background whatsoever in psychology, criminal or otherwise.The state attorneys even submitted an objection, asking for Moore’s testimony as an “expert witness” to be thrown out. We will not know until later whether Judge Thompson will sustain that.

When ACLU attorneys did address the actual practice of performing abortions, it was regarding access, not patient care, and involved experts like Dr. Stanley Henshaw of the Guttmacher Institute, plus a couple of pro-abortion sociology experts.All of these experts openly admitted having done no research for the state of Alabama. Yet they were readily offering predictions and percentages regarding how access to abortion would be severely limited if the hospital privileges regulation was allowed to be enforced and the current abortionists could not obtain privileges.

Dr. Henshaw was even able to come up with an actual statistic, claiming that 20% of Alabama women would be unable to obtain abortion services. In cross-examination from state attorneys, however, Dr. Henshaw also revealed that he had not looked at any data for Alabama, including population rates for women. And yet, somehow, perhaps with the power of magic, he still calculated the 20% statistic.

When the state attorneys began calling their own witnesses, the focus of the trial finally returned to the actual issue at hand: continuity of care from surgical ambulatory facilities, which the hospital privilege regulation is designed to ensure.

Throughout the trial, ACLU attorneys reiterated as much as possible that the new regulation required entirely too much of any abortionist, as the complication rate of abortion procedures (ACLU claims) is relatively low.The logic being that hospital privileges for abortionists should not be required because only a few women are going to need emergency care.

However, the state’s witness, Dr. Geoffrey Keyes, president of the American Association for Accreditation of Ambulatory Surgical Facilities, and experienced physician, struck right at the heart of ACLU’s attempt to downplay the rate of complications.

Keyes’ testimony brought out the state’s argument that regulations regarding continuity of care should be created for the sake of the single patient, as each individual deserves the highest standard of care no matter what the complication rate.

Another expert witness from the state, Dr. James Anderson, a doctor with over twenty years of experience in emergency medicine, revealed an essential point regarding any attempts at all to deduce the complication rate of abortions. According to his testimony, it would be impossible to know the true extent of abortion complications in the United States because “there is no vehicle in which to report them.”

Dr. John Thorp, another expert witness, confirmed Dr. Anderson’s testimony, stating that because the U.S. does not maintain linked medical records, “there is an under-ascertainment of complications, which almost every expert thinks occurs.” Dr. Thorp also reinforced Dr. Keyes’ testimony. “You don’t really care what the percentage is,” Dr. Thorp said in regards to a single woman experiencing a complication, “you want the care.”

The ACLU attorneys, of course, ignored this argument and, instead, attempted to discredit every expert that the state brought forth as part of the same “anti-abortionist extremists” they’d already spent such exorbitant amounts of time complaining about.

Now, with testimony concluded and closing arguments made, Judge Myron Thompson must sit down to consider his decision. Having taken in the majority of the trial first-hand,I believe the judge has two options before him: allowing the state to continue raising the standard of healthcare in Alabama with a practical regulation that not only ensures continuity of care, but is also operating successfully in other states, or, allowing himself to be swept up in the never-ending rhetoric of ACLU and PPSE, which insists that abortionists – not the documented women they have harmed with their flippant disregard for the law – are the victims in Alabama, and should be sided with at all costs, regardless of any actual facts.

Or, to put it more plainly, with words that I will borrow from Dr. Anderson, Judge Thompson can choose between upholding “a patient-centered care system versus a doctor-centered care system.” Only, to choose these doctors over their patients is to choose a group of supposed physicians who are riddled with lawsuits and indictments; have a documented history of breaking state and federal laws; and show up just long enough to profit from the death of our preborn children before hopping on a plane and flying back to wherever it is they call home – paid for their “service,” but free from any obligation to continue their patients’ care.May Judge Thompson have eyes to see and ears to hear the truth of this dangerous situation