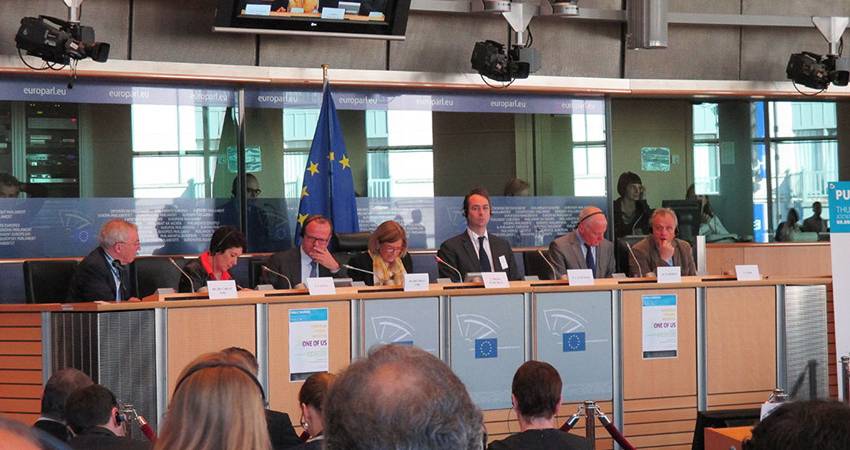 On 10th April 2014 I and some other members of Precious Life attended the European Parliament’s public hearing for the European Citizen Initiative One of Us. With nearly two million collected signatures of support, the One of Us initiative was presented as the largest petition in the European Parliament’s history. The aim of this initiative is to prevent EU funding being used to advance embryo stem-cell research and any other activity that involves the destruction of unborn human life. The success of the One of Us initiative shows that the protection of every human being from the moment of conception is a matter of great concern of European citizens. Approximately $120 million in EU development aid is currently spent each year to protect reproductive health.[1] This initiative has given European citizens a voice to discuss and debate the allocation of this funding.

After all the hard work and commitment of the twenty eight Member States and the nearly two million citizens who have spoken on behalf of unborn human life, who is ‘one of us’, this hearing of the One of Us initiative was ‘an historic day for those who strive to protect the lives of unborn children’. However, the hardwork has only begun. The One of Us initiative proposes that an ethics clause be added to the EU’s Financial Regulation, which would prohibit the allocation of EU funds to any activity that involves the destruction of unborn human life.[2] It calls on the European Commission to respond to the initiative by launching a legislative procedure on the basis of this proposal.

Many of the arguments presented at the hearing of the One of Us initiative exposed the out-dated slogans and arguments on abortion which can no longer hide the fact that every abortion ends the life of a precious unborn child and can have harmful physical, emotional, or psychological consequences for the woman. The illegality of abortion does not automatically cause a high mortality rate as many countries prohibiting abortion, for instance, Chile, Ireland, and Poland, have some of the lowest maternal mortality rates in the world. Abortion is not an essential element of reproductive health’.[3] Women of the world deserve better. They deserve medical treatment and care that helps them and their children to thrive. Abortion does nothing to meet their needs.

Precious Life is proud to be a part of the One of Us initiative and hopes that the European Commission will respond to the nearly two million citizens’ petition by introducing a full-fledged legislative process according to the demands of One of Us.

Watch the RTE news report on the event