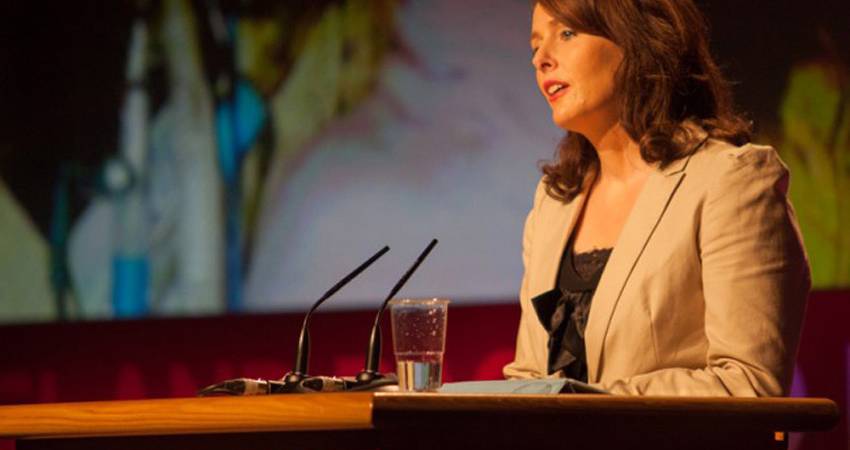 THE GIRL WHO LOVES – THE AMAZING STORY OF KATHLEEN ROSE

Having attended the National Convention for Life recently in Dublin I was lucky to have heard the wonderful story Tracy Harkin had to tell.

Originally from Antrim, Tracy was living in Washington State when she became pregnant on her fifth child and she felt she had nothing to worry about. Everything was going along so perfectly that she decided after her 20 week scan to have a home water birth.

Kathleen Rose was born November 2006: a beautiful baby girl floating up into her mother’s arms, something Tracy will never forget. But within a couple of hours this little girl started to show signs of trouble, and she was brought to the local children’s hospital for a check up. After two hours of doctors coming and going Tracy felt urged to baptise her baby girl, saying “ Lord we deserve baptism for our little girl, help her and strengthen her”.

Shortly afterwards little Kathleen’s body began to turn a terrifying blue colour which seemed to spread across her little body. Doctors came from everywhere, pummeling her tiny chest and pushing tubes down her neck, desperately trying to revive the tiny child.

Kathleen Rose did not die that day, but the following days and weeks became a terrifying whirlwind of endless tests, with each one producing results that seemed worse than the previous.

Within a week she was diagnosed with Trisomy 13, a chromosome anomaly that affects 1 in 1000 children, where the child has an extra 13th chromosome. The information Tracy received did not inspire hope. She was told 90% of babies with this diagnosis did not make it to their first birthday. If Kathleen Rose’s condition had been diagnosed before birth she would have been deemed “incompatible with life” and Tracy would no doubt have been urged to abort. Now this tiny one week old baby was termed “life limited”, and yet this little “life limited” girl lying in a hospital on a ventilator had the ability to touch the hearts of so many people. Masses, prayers and holy relics came from all over the world, dinners were sent for the family, people all over offered support to this precious child and her family.

But on the other hand there were the medical staff who were telling Tracy and her husband Tom that she didn’t have to do this, that they could withdraw treatments, just give up! She knew this was not an option; that her little girl deserved her life. Kathleen Rose was more than a fatal diagnosis or a case to be given up on – she was an individual, a precious baby girl, and because of the determination of her parents medics started to treat Kathleen Rose that way too. Despite the gloomy diagnosis, doctors found none of her organs were fatally affected. She got the best of care possible, and 6 weeks later, following the insertion of a feeding tube, Kathleen Rose was ready to come home.

For the first year Kathleen Rose appeared to do well, and, like any other baby her age, she made attempts to move around and crawl. It wasn’t until a sleep study was undertaken that they found that Kathleen Rose also had severe sleep apnea (a chronic medical condition where a person repeatedly stops breathing during sleep). In fact the consultant was astounded that she was still alive, but due to the severity of the apnea they really though she would not survive much longer.

With this new heartbreaking diagnosis they decided it was time to come home to Ireland, so little Kathleen Rose could live out her time with their families.

But despite the rollercoaster first year and all the diagnoses Kathleen Rose proved to be a fighter and kept bouncing back. By age 3, her health conditions had stabilized and she went from strength to strength, defying all odds and confounding the medical experts.

She is now a happy 7 year old little girl with a cheeky little grin, with an abundance of energy and a love for mischief and bear hugs! I had the privilege of meeting her at the National Convention for Life and she slots so perfectly into her family that they couldn’t imagine it without her. She is obviously adored by her siblings, and seen as a precious gift by her whole family.

Tracy began to search the internet to find other cases like that of Kathleen Rose, and what she found was disturbing. Tracy saw that other parents in similar circumstances were been given outdated information which strongly suggested that intervention after birth was always a waste of time. Children born with a ‘fatal diagnosis’ were not always examined or given oxygen – sometimes not even fluids were given. They were not treated as the unique children they were but only as a fatal diagnosis. She saw that it has become an acceptable norm to convince parents that it is responsible and compassionate choice to end the life of their baby before it is born, and then to refuse intervention which could assist after the baby is born.

Evidence of this attitude was recently discussed in a review in the medical journal Current Opinion in Pediatrics which stated that there “has been a trend from nonintervention for infants/children with trisomy 18 toward management to prolong life. It has become clear that the prognosis for infants/children with trisomy 18 is not as ‘hopeless’ as was once asserted.” The review concluded that “[h]ealthcare management approaches or policies that reject out of hand the goal of prolonging the life of any infant/child with trisomy 18 are not defensible”.

Tracy shared that here in Ireland more than 90% of parents continue with the pregnancy after a very poor diagnosis. She is now part of the Every Life Counts initiative which is working to protect children and families, and pressing for perinatal hospice services in Ireland, to provide support and life affirming services to parents and babies who are facing ‘life-limiting’ diagnosis. Like so many other families, Tracy wants parents to be given the gift of time, and the loving and supporting care their children deserve. These children will not be just seen as “incompatible with life” or “life limited” but as the beautiful unique individuals that they are, deserving of making their mark on this world regardless of how short or how tiny that mark may be, because every life is precious, and there is no footprint too small that it cannot leave an imprint on this world.