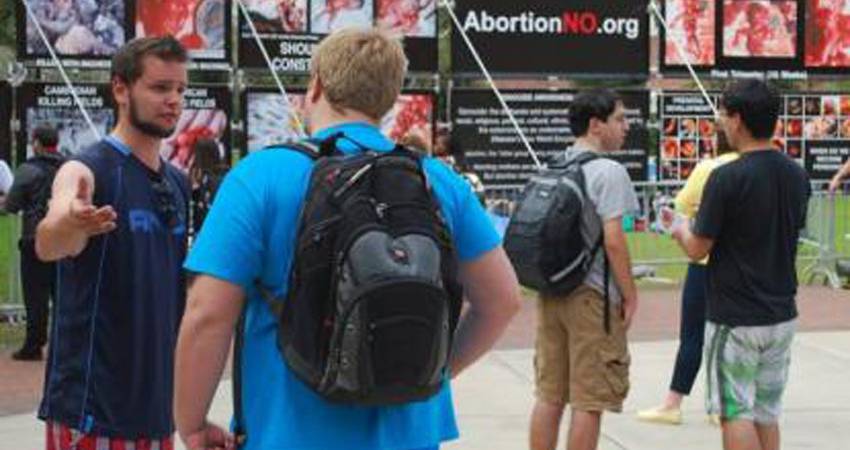 Why is it that left-wingers suddenly develop an ironclad belief in government non-intervention—only when we’re talking about endorsing and funding the practice of suctioning, chemically poisoning, dismembering, and otherwise dispensing with the youngest human beings in our society? It would be amusing, I think, if it wasn’t so murderously morbid.

I’ve been on the road with my colleagues this month, setting up the Genocide Awareness Project on American university campuses with teams of volunteers and engaging university students and professors on the issue of abortion. One of the most common arguments I got in front of the GAP display was the indignant, “The government can’t force people to carry a baby! I’m pro-choice!” (I usually add mentally: Except when it comes to schools, trade, health care, union membership and on and on…)

Moving beyond the irony, though, people seem to have a fundamental misunderstanding of the role of government. I’m not wading into the left-wing versus right-wing versus libertarian argument here—across the political spectrum, one thing we can all agree on (one would hope) is that one of the foundational purposes of government is to protect the weak from the strong. We can debate what the government’s role in education, healthcare, and welfare are. But surely if the government has any moral legitimacy whatsoever, it will protect those human beings in society that need it the most. Deciding the fate of human beings based on whether or not other human beings feel a certain way about them is simply a tyranny of the majority.

And we are talking about human beings here. One guy yelled at the display that, “A woman has the right to decide whether or not to bring a life into the world!”

The whole idea that the dependence of the pre-born child on his or her mother provides a justification for killing said child is ludicrous—governments draft laws specifically to protect those who are more dependent—the very young, the very old, and the disabled. We call them dependents, not “disposables,” because we recognize that the dependence of these human beings heightens our responsibility to them, not lessens it.

Governments have endorsed the injustices before. Groups of human beings—women, African Americans, First Nations peoples, and many others have been subject to atrocities because while they were recognized as human beings, they were not considered to be legal persons. Our generation has the lethal age discrimination of abortion to deal with.

Because if the government will not protect them, the responsibility falls to us.