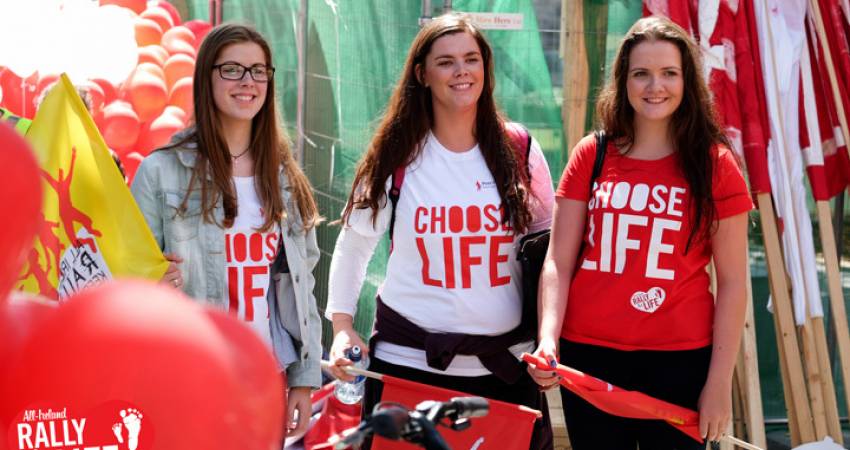 30,000 strong: Why it's so important that the rally for life crowd doubled expectations

What a wonderful, uplifting, inspiring day. The sun shone on 30,000 people who packed O’Connell Street for the Rally for Life, and they came in their droves to send a strong, powerful message to the government – we want our mothers and babies to have constitutional protection from abortion.

We were expecting a crowd of 15,000, but, as 2 o’clock came, and streams of people poured into the area around the Garden of Remembrance, and then pressed into the Rally as it began to make its way down to O’Connell Street, it was clear that this march was going to exceed all expectations.

It was packed: a huge crowd filling O’Connell Street in the sunshine, coming to celebrate life and to stand against abortion. Thousands of young people led the Rally, with banners and flags held high, and then came the red open-top bus with rapper Evans Junior lifting the crowd, and then tens of thousands of people of all ages: kids in pro-life tshirts up on their dad’s shoulders; grannies wearing Rally for Life sunglasses; mothers with buggies and placards saying ‘Love Them Both’; masses of people waving ‘Every Life Matters’ and ‘I Vote Pro-Life’ signs; a truck with balloons and team of young people leading the throng behind them to say, ‘I say Pro, you say Life’ and ‘Hey, Hey, Ho, Ho, Amnesty has got to go’.

It was a sea of colour, a carnival of pro-life pride, and it took a full 90 minutes to pass the centre of Dublin city centre, as shoppers applauded the Rally and joined in to show support.

“You got a bigger crowd than you expected,” the Inspector from Store Street said to me as we watched the Rally come down O’Connell Street. Gardaí confirmed that the crowd was between 25-30,000 – a simply astonishing number to come out in support of any issue, but all the more remarkable given lack of media coverage for the pro-life cause.

The Rally doubled our expectations – and the power of that response will not be lost on the political parties who are at this moment sounding out the electorate in regard to extending Ireland’s abortion laws.

As we pointed out in media interviews around the Rally, the size of the crowd showed that the intensity of feeling amongst pro-life voters has remained very high. The number of people engaged with the pro-life movement is increasing, and that will have a major impact on the Vote Pro-Life initiative in the next election.

There isn’t a political party who wouldn’t wish for the young, energetic, committed following who rocked the Rally for Life.

In fact, in stark contrast to the Rally, calls to repeal the 8th Amendment are not backed by any major public demand for a change to the law. Marches for abortion, despite the support of the media, political parties and trade unions, can only muster a fraction of the crowd at the Rally for Life. Remember the rallying cry of the Labour Party a few weeks back, when increasingly-desperate Minister Aódhán Ó Riordáin said that ‘a vote for Labour was a vote to Repeal the 8th Amendment’? Labour are at between 5 and 8% in the polls, and their increasingly extreme support for abortion is getting them nowhere.

At the Rally, Mary Bridget, Kevin, Grace, Joseph and their families struck a powerful chord as they spoke up for the right to life of all children with disabilities, as did Mandy Dunne who moved everyone to tears when speaking about the tremendous love her family showed for baby Muireann who lived for 6 weeks after birth with Trisomy 13.

They were cheered and loved by 30,000 people who came to Rally for Life, and who will play a vital role in the next election, and in ensuring that mothers and babies are given love and support, not abortion.