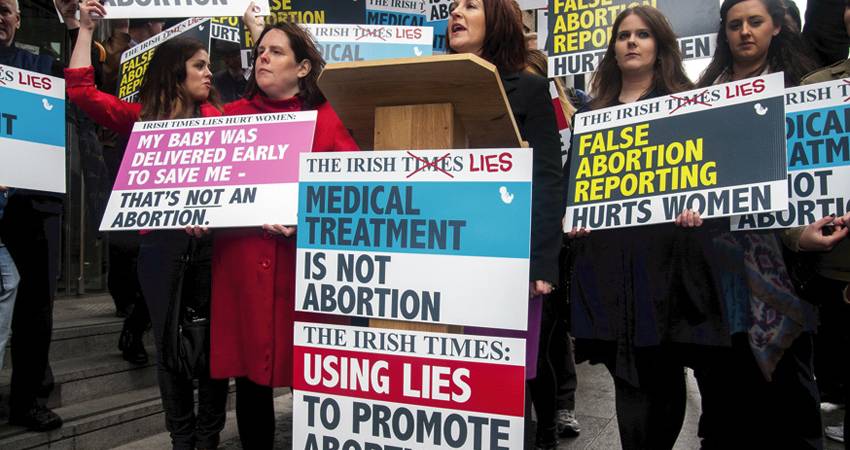 The Irish Times and the 'Totally False' Abortion Story

The inquiry has been held, and the Irish Times’ infamous ‘first Irish abortion’ story has been shown to be totally and utterly false. Journalist Paul Cullen and his employers at the national broadsheet have disgraced themselves, once again, by their decision to splash a piece of pro-abortion propaganda across the front pages in a cynical attempt to exalt Fine Gael’s abortion legislation – only for that propaganda to be exposed as a lame piece of fiction in less than 24 hours.

Cullen, who together with Kitty Holland “broke” the story of Savita Halappanavar in the same newspaper in 2012, is not solely to blame however as this hogwash abortion story was clearly given two thumbs up by his editor, and most likely whatever legal filter they have at the Irish Times.

Here is the background: On August 23rd 2013, just a few weeks following the passing of the Irish abortion legislation, an article appeared on the front page of the Irish Times which blazed the headline, “First abortion carried out under new abortion legislation”. The sub heading read “Case similar to that of Savita Halappanavar” and the went on to describe a case of a woman who was pregnant with twins at 18 weeks and who had developed signs of infection, as did Savita. However, the Irish Times alleged, in contrast to Savita’s case, this woman had undergone a termination of pregnancy at the National Maternity Hospital under the new abortion legislation and her life had been saved. It was suggested that had this legislation been in place at the time of Savita’s death then perhaps her life too would have been saved. The article named known abortion rights advocates Drs Peter Boylan and Rhona O’Mahony and said that they had both sanctioned the termination. So far, it seemed like the usual Irish Times abortion obsession. But this time their OCD for telling abortion lies would come back to haunt them.

On the very same day the article had been printed, the Department of Health released a memo saying that the new abortion legislation had in fact not yet been enacted. So the doctors involved in this story were practicing under the very same laws and guidelines that they had relied on for years, including in October 2012 when Savita Halappanvar was in University Hospital Galway with a septic miscarriage.

Wait…so did the “Sword of Damocles” swoop down from Peter Boylan’s imagination and chop off the heads of the doctors who intervened to save the life of this woman by delivering her twins at 18 weeks?

Were they at the very least arrested? Was the woman arrested and prosecuted and sentenced to years in prison for availing of this life saving treatment as the pro-abortion campaigners claimed women would be? Was the hospital fined and charged with carrying out an illegal procedure? No, of course not. In fact, Dr Simon Mills barrister-at-law and former GP said that the procedure was “perfectly legal” irrespective of whether or not the new law had come into place. And there we had it. What the Irish Times tried to re-imagine as an abortion story was, in fact, the most solid proof, if it were ever needed, that Fine Gael’s abortion legislation was never needed to save women’s lives. The pro-life movement breathed a collective sigh of “we told you so”.So what was Paul Cullen’s fairy tale all about? What exactly happened at the National Maternity Hospital? The day after the article was printed Dr Peter Boylan went on RTE Radio to express his disgust that there had been a confidentiality breach and that the woman involved in this case could potentially be identified. He didn’t suggest there was no such case nor did he say anything about the legislation he had supported so vociferously previously. He also made no reference to the fact that Paul Cullen specifically mentioned that he, Dr Boylan, had sanctioned the pregnancy to be terminated. The plot thickened.

10 days later the Irish Times printed a small correction on one of the inside pages saying that “the case described in the article did not happen” and that the article was printed “in good faith”. Hold up. First we learn that the premise of the article is completely false i.e that the life saving intervention availed of by this sick mother was not carried out under new abortion legislation. Now we read that the case in question in fact “did not happen”. What on earth was going on? At this point, the only thing we could be certain about is the Irish Times was neck deep in something spurious and it was all self-inflicted due to their mindless fixation on promoting abortion.

We may not have known exactly what happened between the paper and the maternity hospital for this story to be cooked up but three things instantly became clear;

The new abortion legislation was never needed to save women’s lives in pregnancy. Doctors always intervened to save women who suffered life threatening complications of pregnancy and were free to do so.

The death of Savita Halappanavar was not caused by Ireland’s pro-life laws. Doctors caring for Savita would have been free to intervene and deliver her baby at 17 weeks in order to treat the infection what was risking her life. Just as in the case which was misreported by the Irish Times, Savita too “developed signs of sepsis”, however the hospital staff missed those signs and ultimately her diagnosis was delayed

The Irish Times are hell bent on venerating abortion, even if it means carrying a front-page headline that is at worst a complete lie or at best a mistake caused by a blind promotion of abortion.

Last week, The Sunday Times, using evidence obtained under Freedom of Information, carried a sizeable article on the whole fiasco with the Irish Times non-story which they described as ‘totally false’.  Some things were clarified and some things still remain unclear. The hospital revealed that in the period from July 30th to August 23rd when the article was printed, two women who had been carrying twins had miscarriages and were treated at the hospital.

Neither case bore any resemblance to the case described in the Irish Times leaving the hospital to conclude that no such case even existed.

The hospital found that, in all relevant cases under review, the term ‘termination of pregnancy’ had never been used. An apology was issued by the Irish Times to the hospital.But something is still not clear since only one of two scenarios can exist; Paul Cullen, whether alone or with others, completely fabricated this case in order to promote abortion and pretend the legislation was a good thing for pregnant women. Or he was informed by somebody within the hospital that a woman had had a “life-saving abortion” under the new legislation which would make for a great piece of abortion propaganda.

Which scenario is correct? Time may tell.