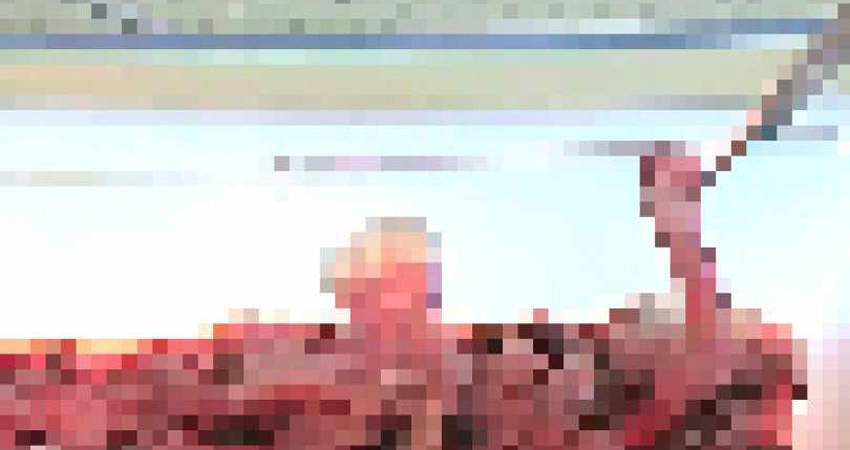 When General George S. Patton began to discover barb-wire camps full of dead, dying, skeletal people in 1945, it moved him like nothing in years of blood-stained warfare had.

Patton began rounding up German civilians—not to execute them in revenge, but to walk them through the camps, so that they could lay their eyes on precisely what it was that had happened on their watch. Patton knew that the German populace wouldn’t voluntarily visit the camps. He knew they wouldn’t want to see the emaciated corpses and barely-living neighbors they had abandoned. He knew that to see them would be upsetting, if not life-changing.

But it had to happen.

We hide the truth at our peril, and at the peril of unborn children in risk of abortion. The non-pixellated version of this photo is below. Be warned: it just might change your views on abortion.

And so it is today with David Daleidan of the Center for Medical Progress, who is walking us step by painful step through the corridors of sterile Planned Parenthood clinics where severed human limbs are removed from freezers and coldly poked while price-haggling begins. The all-too-familiar rhetoric of dehumanization — “parasite,” “clump of cells,” “sub-human” — makes way for a chilling silence as we see pathetic piles of human arms, legs, livers, and tiny, twisted faces that demand our attention and assault our consciences.

While the use of abortion victim photography has been debated for years — in spite of the fact that no social reform movement in human history has ever ended an injustice without the graphic exposure of what happened to the victims — David Daleidan has put an end to that debate. While many churches and pro-life groups dither over whether or not to use the best evidence of what abortion does to human beings, FOX News aired photos of tiny dismembered baby parts on national television, exposing to one of the largest audiences ever the “graphic evidence” that, they noted, “shocked even hard-core abortion foes.”

These videos are turning into this generation’s version of Uncle Tom’s Cabin, or today’s Lewis Hine child-labor photos. Some pro-lifers are referring to the aborted babies featured in these videos as “Emmett.” Emmet Till, of course, was the fourteen-year-old African American boy savagely murdered in 1955 in Money, Mississippi. Photographs of his open casket funeral set the stage for the Civil Rights Movement, and inspired Rosa Parks’ famous act of defiance. The weight of gory evidence must press down on the conscience of a nation before they can understand the barbarism they inflict and tolerate.

In the US, we see the national media for the first time broadcasting evidence of abortion’s inhumanity to huge numbers—and we see the impact on Planned Parenthood unfolding week after week.

Too often, we are persuaded by ahistorical arguments that we must hide the evidence of what abortion does. In a culture that relentlessly pursues the end of “feeling good,” we are told that abortion victim photos make people “feel bad,” and thus are counter-productive. Instead, our movement must fight a battle with no enemy and no victim, and one in which the baby is only discussed in the most abstract of terms—exclusively discussing women’s health is considered more palatable. You can explain how horrible abortion is, just so long as you don’t attempt to prove it in the most decisive and compelling way.

We can no longer deny as a movement that it is evidence of what abortion does that illustrates to people why it is unsupportable. David Daleidan is like so many other pro-life leaders, who was himself convicted by photos of abortion victims.

He has illustrated by his exposés of Planned Parenthood that only exposing the truth is sufficient to bring about change. The chilling images of butchered humans, now seen by millions, have even long-term pro-choicers admitting, “I don’t know if I’m pro-choice after Planned Parenthood videos.”We hear often that abortion victim photography doesn’t work because “the pro-life movement has been trying it for years, and it hasn’t worked.” Actually, the pro-life movement has never used them on a wide enough scale to determine their impact—here in Canada, the No2Trudeau Campaign’s one million postcards of abortion victims will be the biggest distribution of abortion photos anywhere.

Additionally, those who have used abortion victim photos have hundreds of stories of people changing their minds—and if one thing has surprised me consistently, it is how many people have been in the pro-life movement for years without ever having seen someone change their mind on the issue. In the U.S., we see the national media for the first time broadcasting evidence of abortion’s inhumanity to huge numbers—and we see the impact on Planned Parenthood unfolding week after week.

Watch the reaction of politicians and leaders, journalists and activists describing how they felt when seeing the Planned Parenthood videos. They describe it as horrifying, gut-wrenching, gruesome, and difficult to watch. And yet, in spite of the fact that no one wants to see such things, when David Daleidan made it impossible to ignore, they did. And that is having a huge, if not unprecedented impact on the American abortion debate.

Watch Cecile Richards and the other Planned Parenthood minions scramble desperately to suppress the evidence through whatever means possible, and ask yourself why they are terrified that the American public will see these images.

Every movement that seeks to expose injustice faces criticism, much of it from within. Many people have bought into the idea that in this culture of feelings, only by making people feel good will we begin to achieve a new cultural consciousness on abortion. This is nothing new. Every group that has sought to bring the plight of victims to light by using the best evidence available has faced the same criticism.

I would respond in the same way that Lewis Hine, the photographer who took the photographs that awakened America to the abuses happening within the factories, coal mines, and lumber yards, responded. When people complained about the photographs he bombarded the public with, he said, “Perhaps you are weary of child labour pictures. Well, so are the rest of us, but we propose to make you and the whole country so sick and tired of the whole business that when the time for action comes, child labour pictures will be records of the past.”

Because that, history tells us, is the way injustices become history.

Johnathon Van Maren works with the Canadian Centre for Bio-ethical Reform and blogs on their website and others. His articles are printed here with permission