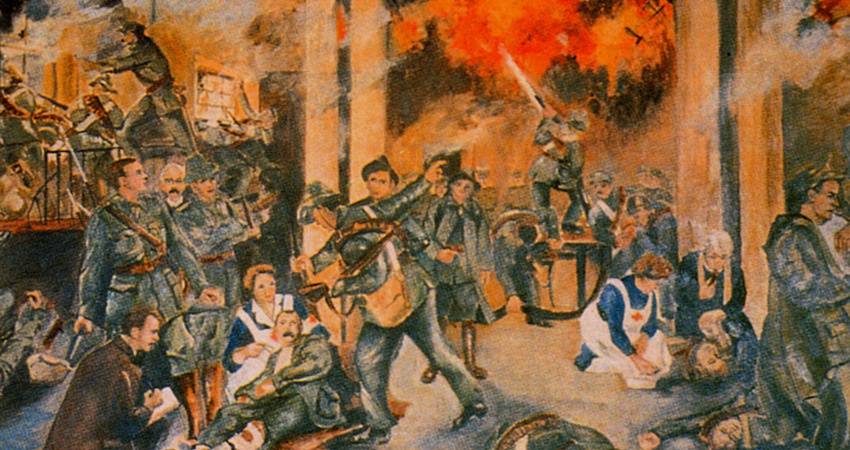 We don't need a new proclamation, just a renewed desire to cherish all the children

It’s pretty clear now that, in the next twelve months and beyond, it will be up to the people to really commemorate and celebrate the 100th anniversary of the Easter Rising.

The increasingly craven pronouncements by Fine Gael on the Rising suggests their intention is to host some sort of a cringing apology for the audacity of the men and women who sought our freedom, despite the fact that most people have enormous admiration for the leaders of 1916.

Sinn Féin, of course, just want to hijack the sacrifice of the Volunteers for their own political purposes, but even they haven’t gone as far as to suggest, as Enda Kenny did, that a new Proclamation might be required.

There was a negative reaction from the public when Kenny seemed to propose that idea. The idea that a deeply unpopular government, whose actions have always put bankers and bureaucrats before the people, would presume to replace a much-cherished document like the Proclamation provoked a storm on social media and beyond.

Before long, government spokespersons were clarifying that they weren’t actually about to try to rewrite the document which stated the people were entitled to liberty and equal opportunity, and to seek happiness and prosperity.

No wonder. Could anyone take Fine Gael and Labour seriously if they, the architects of Ireland’s first abortion legislation, claimed to cherish all the children of the nation equally?

In fact, the commemoration of the Rising and the focus on the Proclamation has emphasised just how medieval and backward the attitudes of some politicians and campaigners have become towards unborn children in recent times.

The Proclamation guarantees all Irish citizens equal rights and opportunities (it doesn’t exclude those children who are unborn, or sick or unplanned) and speaks of being ‘oblivious of the differences’ which have been ‘carefully fostered’ to act as a block to the goal of cherishing all the children of the nation equally.

It couldn’t have been more prophetic. We have seen, in the past 20 years in particular, how well-funded abortion campaigners have worked to try to carefully foster a cruel and destructive attitude towards the most vulnerable people in our society. They have tried, despite all the evidence to the contrary, to convince the Irish people that an unborn child is not a person, should not enjoy equal rights, and the lives of these children can be taken as a matter of choice.

In their fanatical support of legalised abortion, campaigners and politicians have sought to persuade the public to ignore science, ignore medical progress, and ignore the basic human rights and needs of mothers and babies.

Their current focus is on unborn babies with a severe disability and, again, instead of the life-affirming and enlightened answer of perinatal hospice, they demand only the ‘right’ to take the life of a child.

Unlike the leaders of 1916, who were not just revolutionary but progressive in their attitudes to education and to equality, abortion campaigners want to drag the country backwards in relation to caring for mothers and babies. Yet, for most of the people, most of time, abortion is not a compassionate solution, and the number of women travelling for abortions continues to fall each year as we build better supports for mothers and grow awareness of the humanity of the baby and the truth about abortion.

100 years after the Easter Rising, we don’t need a new Proclamation, we just need a renewed desire to cherish all the children of the nation equally: born and unborn, without or with disabilities.

As we celebrate freedom and opportunity, we should continue to offer mothers and babies more than the barbaric and medieval answer of abortion.  In the spirit of 1916 we should ensure that this nation loves them both.