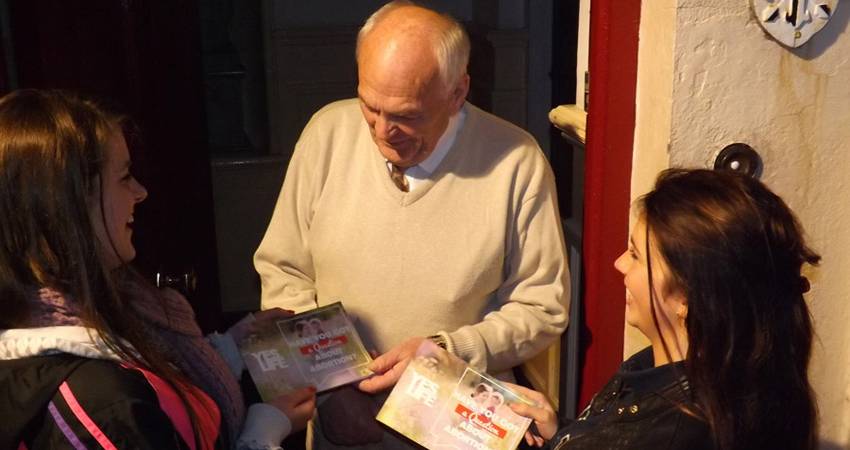 This week, the Journal ran a fact-check on the 20-page information booklet from the Life Institute used in the Life Canvass, and, much to the chagrin of abortion supporters, they didn’t find one false statement in it.

The piece attracted a lot of comments from readers who were shocked to learn that 1 in every 5 babies in Britain was aborted, or that babies can be aborted until birth in that country, or that repeat abortion rates were as high as 41% across Europe.

Now, let’s be realistic, many people take fact-checks with a pinch of salt, because biases and elements of subjectivity can creep into the conclusions fact checkers make.

(In this instance, of course, the Journal’s bias on abortion is fairly obvious to anyone who spends more than half a minute on their site.)However, fact checker Dan McGuill did go to a lot of trouble to find information and look at the evidence, and he did find that none of the 19 claims he fact-checked from the Life Institute booklet were false.

(Apparently, he did also fact-check other statements from the booklet, such as the observation that abortion campaigners are seeking ‘abortion on demand’ – 100% true – but for some reason not everything was not included in the final cut for publication.)

NIT-PICKING RATHER THAN FACT CHECKING

Some of McGuill’s conclusions seemed somewhat pedantic, such as saying the Life Institute’s statement on France’s 21% abortion rate was ‘mostly true’ because he calculated it at 21.9%. This seemed more like nit-picking than fact-checking.

Other conclusions were, in my view, a bit daft, such as where he found fault with the Life Institute’s description of the 67% who voted in favour of the 8th in 1983 as a huge majority. He argued that was only ‘half-true’ because the majority (a two-thirds majority) wasn’t really ‘huge’. This is a silly quibble, especially given the Journal’s description of the 62% Yes vote in the marriage referendum as ‘overwhelming’. You can’t have it both ways lads.

Examining the Life Institute’s statement that abortion is available until birth where the baby has a disability, McGuill said this was only ‘mostly true’ because, he argued, these abortions were ‘extremely rare’ and the disability involved was required to be thought serious ‘by two medical professionals’ (he had acknowledged that the disabilities in question included Down Syndrome – and we know of at least one case of a baby aborted after 24 weeks because of a cleft palate). He then admitted that ‘however, it is allowed under British law, and does take place’. That would surely lead to the conclusion that the statement is true, not ‘mostly true’.

THAT 66 BABIES SURVIVED ABORTION IS A MATTER OF RECORD

It’s important to note that the Life Institute has strongly rejected the only negative finding McGuill made, where he rated the presentation of the shocking revelation of 66 babies surviving abortion in the UK in one year alone as ‘mostly false’.

Sadly, the fact that 66 babies survived abortion in the UK in just one year – 2005 – is a matter of record.

The 2005 report on Perinatal Mortality from the Confidential Enquiry into Maternal and Child Health (published in 2007) lays out the shocking facts on page 28:

So 66 babies survived abortion in 2005 alone. They lived for an average of an hour after birth, these helpless little human beings whose lives were targeted for destruction, but who managed to survive the abortion.

The baby was meant to die of course, that’s the whole point of an abortion. If the baby survives and goes onto leave the hospital alive, that’s a failed abortion.

McGuill took issue with the statement that these babies were left to die – even though that is the inescapable conclusion, and that is what happened. The babies all died.

There is no evidence that any life-saving or beneficial interventions were offered to these children. The Daily Mail (seemingly the only British newspaper to report on this horror) stated that these babies were left to die, and that is really the logical and reasonable conclusion. Again, the report did not offer any evidence that the babies were assisted to live.

WHAT REPORTS AND EVIDENCE SAY

The CEMACH chief executive Richard Congdon said lethal injection had not been given in the 16 abortions which took place after 22 weeks’ gestation because death was “inevitable”. His response makes it very clear that the intent of the medical procedure was to kill the baby.

The silence in the British media regarding the extremely disturbing revelations in the CEMACH report was astonishing. The Daily Mail seems to have been the only British paper who brought this to the public’s attention reported on this, and the absence of any comment was clearly driven by political considerations. CEMACH did not report the number of babies surviving abortion in subsequent years, surely a decision which goes against the public interest but which, again, was ignored by the media.

A new report gives us some insight into what is still happening in British hospitals. The Care Quality Commission’s 2016 inspection of Birmingham’s Women’s Hospital reported that:

“We noted the information on medical terminations of pregnancy did not include the risk of a late gestation foetus showing ‘signs of life’ and the potential requirement to register with the coroner.”

”Several nurses across ToPs [abortion services] expressed concerns to us as they had not received training that would equip them to deal with the physical and emotional aspects of advanced gestation abortions.”

“In addition within ToPS two incidents (trust data showed five for Quarter four in 2015/16]) reported on the trust’s incident reporting system, there were other occasions when the condition of the foetus had given them cause for concern and the action they should have taken was unclear.”

Will any questions be asked about these ‘other occasions’ or the ‘condition of the foetus’ giving ‘cause for concern’? Probably not, because the media and political establishment don’t want the distressing truth to get in the way of their dogged and unblinking support for legalised abortion.

Nor is the horror confined to Britain. Last year, a baby who survived an abortion at 24 weeks in Poland was left screaming for an hour before dying. She had been aborted because she had Down Syndrome. In Canada, 491 babies survived abortion and were left to die between 2001-2009.

These horrors are the inevitable outcome of legalising abortion. We should reject the path that may lead us to these outcomes, and challenge any fact-check which denies that these recorded and deeply shocking events took place.

LINK TO THE ARTICLE IN THE JOURNAL

Meme from September when we reached the first target of 100,000 doors canvassed