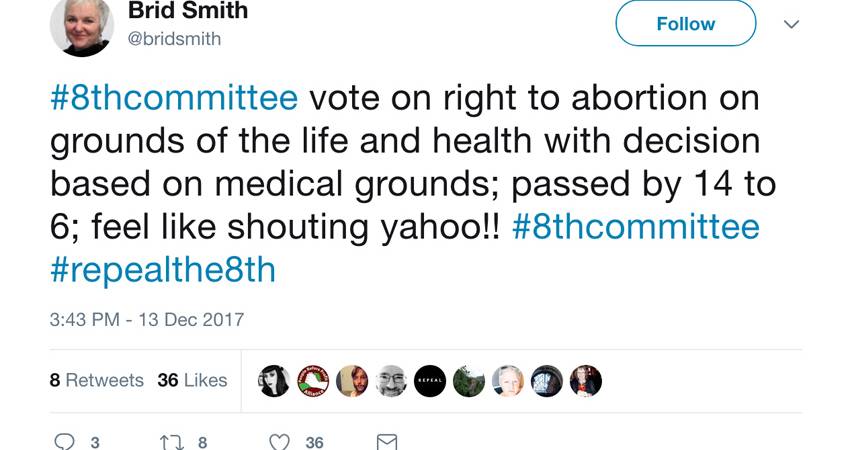 A death sentence: How the abortion committee voted to legalise abortion

It comes as no surprise that the openly rigged and biased Oireachtas Committee on the Eighth Amendment has voted in favour of abortion on demand. It was a foregone conclusion, since the panel was stacked with pro-abortion politicians from the outset, and it heard almost exclusively from pro-abortion witnesses.

The Committee was, in effect, a weekly press conference trying to sell abortion to the Irish people, with the eager assistance of a media that is fully signed up to the Repeal the 8th campaign. Wednesday’s vote just rubber-stamped the whole farce.

The Committee was previously referred to as a ‘kangaroo court’, which it is, and this week we saw that kangaroo court pass a death sentence on preborn children – a sentence passed down without fair trail, without fair representation. This was a gang of politicians (with some honourable exceptions) that acted more like a lynch mob than a judge and jury. If you think I’m over stating the case, look at the Twitter feed of Bríd Smith where she talks about “shouting yahoo” in response to abortion being legalised.

Shouting yahoo as you legalise abortion? It takes a very twisted sort of ideology to cheer at the thought of more abortions taking place, but that ideology has been given a warm welcome by the Abortion Committee over the past  three months, with TDs and Senators falling over themselves to offer a sycophantic welcome to abortionists – people who actually kill babies for a living.

This cheerleading for abortion has not been confined to the Committee – Sinn Féín’s Francie Molloy described how some of its members at the party’s Ard Fheis were ‘hysterical’ and ‘gloating’ when a motion to legalise abortion was passed.

Just like the rapid pro-aborts who seem to have hijacked Sinn Féin however,  the Abortion Committee is labouring under the misapprehension that the Irish people are ‘shouting yahoo’ to abortion being legalised.

After two years knocking on doors with the Life Canvass, I can tell you that most Irish people – the decent, sane, compassionate ones – see abortion as a sad and dreadful thing, something to be avoided rather than welcomed. Definitely something not to ‘shout yahoo’ and ‘gloat’ about.

The three pro-life politicians at the Committee – Mattie McGrath, Peter Fitzpatrick and Rónán Mullen were attacked, jeered and insulted when they sought to ask challenging questions of the steady stream pro-abortion witnesses.

Apart from those three representatives, this Committee showed no interest in hearing what abortion meant for the baby. They didn’t hear from an embryologist for example, or from an abortion survivor – a suggestion made by Peadar Toibín TD – or from women hurt by abortion, or from any pro-life Ob/Gyns.

In fact, the baby, who is recognised as a human being under our Constitution, was barely mentioned during the hearings.

So the majority pro-abortion Committee met every week to hear from pro-abortion ‘experts’ picked to tell them that their opinion was the correct one,  and then, to absolutely no-one’s surprise, decided that abortion should be legalised. This is called groupthink. It is the very opposite of a free and fair debate.

Committee members who are purporting to be pro-life while voting for abortion without restriction are fooling nobody. Likewise, Fianna Fáil members of the Committee who voted for abortion have betrayed the party’s own grassroots and should pay the price for that betrayal.

Look at the graph below from reporter Gavan Reilly to see how the Committee voted. Note the majority voting for abortion on demand and for abortion until birth on spurious grounds. See how many voted to allow seedy abortionists exploit women with impunity.

In the week before Christmas then, a great many people are saddened but not surprised to see this rigged Committee deliver the exact result it was set up to achieve.

Our task now is to ensure that, through the united and determined efforts of the Life Canvass , the people see what this cruel and extreme proposal for what it really is and consequently vote to Save the 8th.

There is a referendum to be won, and we will win it.  This death sentence handed down to helpless preborn children by the Abortion Committee will be overturned by the people.