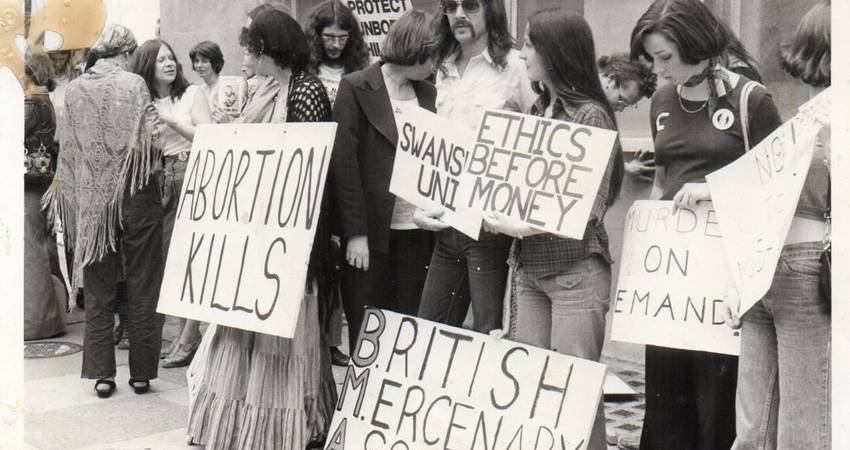 A Story of Life

One of five children, I was born in the late 1930s. Growing up in Ireland during the 1950s was happy, not drab and grey as we are currently led to believe.  In the early 1960s, I emigrated to London with many Irish people. London was a lively place but, compared to now, it was a lot more difficult to travel to and from Ireland to visit family and friends so I often felt homesick. While training as a nurse, I met my husband. An articulate and well-read Englishman with an Irish mother and an English father, he was raised a Catholic.

After the UK Abortion Act was passed in 1967, my husband and I attended Pro-Life rallies and took part in Pro-Life initiatives organised by SPUC. I qualified in England as a Midwife, State-Registered Nurse and Psychiatric Nurse. As a woman, this helped me to understand the strong fulfilment that motherhood brings, and also the physical and mental hurt that abortion can cause. Pregnancy can be difficult but I have always felt that abortion is wrong. From the start, we brought our children with us to Pro-Life events. When my son told his friends that he took part Pro-Life activities as soon as he could walk, I had to correct him. He was actually in a pram on the first occasion.

State sponsored abortion was not rare

As the decades passed by, it became more apparent that state-sponsored abortion was not as rare as people had been led to believe. It is troubling to think that the taxpayer foots the bill for abortion-on-demand in many countries. In Ireland we should see our current situation as a blessing. Any country unscathed by abortion for as many decades as Ireland is blessed but we must now safeguard that blessing.

Medical care has continually advanced in the intervening time. Yet now, within the same hospital, a premature baby can be successfully resuscitated in one ward while, in another ward, the lives of babies of the same age are ended by abortion. The UK Abortion Act of 1967 convinced my husband that legislation is difficult to reverse once on the statute books.

One of the things I appreciated most about my husband was his sense of dry sense of humour. On school mornings the family car was packed with children, many of whom were schoolmates of our own. We put SPUC stickers on the rear windscreen of the car with slogans like, “Abortion Kills Babies” and, at another time, “A Foetus is a Baby: Don’t Forget” As a result, people would drive past the car packed with children and look at my husband thinking that they all belonged to him. Sometimes, though, the stickers could also cause trouble. More than once, when the car was parked, we’d return to find paintwork damaged by keys or coins.

I still have my husband’s SPUC lapel pin from the early years with its symbol of a small white flower. He loved the little feet that later became known as the Pro-Life symbol and he took to wearing them as much as possible. Apparently women seemed to recognise what they were without needing an explanation whereas other people often asked first.

My husband died in 2004. He used to say that some Irish people have an inferiority complex because they think that every other country in the world is better than us. This true with regard to abortion because some people mistakenly think that we need to be like every other country that has abortion already. In fact, being Pro-Life makes Ireland special.

Many years ago, my husband said that it was me who convinced him to be Pro-Life. Men need to realise that their actions have consequences. I think it’s fair to say that abortion also encourages the ego because it puts the individual first and forgets the vulnerable. In the early 1980s, I learnt of a case where a woman decided to have an abortion because the birth would have clashed with her holiday plans. In some ways, people in western society have forgotten how to have children while others are too anxious to consider trying.

Human life is not like ill-fitting clothes that you can take back to the supermarket for a refund. Women need to wake up and understand that life is never the same again once you’ve become pregnant. If you carry the baby to term, your life will never be the same. If you don’t have your baby, life will never be the same again. Children are a priceless, irreplaceable gift. It is a privilege to be a parent, not a right. But instead, people today are cheated into putting superficial material gain first.

Throughout these years in England, I always thought of Ireland as the best place to be. Every summer, we would return home where our children could meet up with their cousins. The contrast in family size between the two countries was apparent in the early 1980s with many families in England limited to two children at most. Even though all five of ours were born in London, we wanted to rear them in a country that protects mothers and cherishes life in all its stages from conception to natural death. The 1983 Amendment to Bunreacht na hÉireann exemplified this most of all because it enshrines the equal rights of mother and baby. Undoubtedly, this made the quality of life in Ireland far better than the standard of living in England. A year after the 8th Amendment was passed, we returned to Ireland for good.

Two of our sons died from a hereditary illness. At the time we did not know the cause because it is a rare physical condition. Medical science was unable to detect this illness in the womb in either case. That, of course has changed since then. Ultrasound is wonderful. On the other hand, it is disturbing that abortions are now recommended to deal with many of the medical conditions that show up on scans during pregnancy. If I were pregnant with my sons now, doctors would try to claim that each of them had a ‘fatal foetal abnormality’. This is the worst, most slippery excuse for abortion ever. Who defines the specious term, ‘fatal foetal abnormality’, anyway? We know very well that it has no basis in medicine, a fact acknowledged by honest medical practitioners.

Added to the sadness of losing two sons, our youngest daughter was knocked down and killed in a traffic accident.  Her death was devastating. We tried to teach our surviving children to understand that we must live good lives and look forward to seeing our loved ones in eternity.

Life is precious and cannot be taken for granted

Some misguidedly think that they can plan their family and that tragedy or suffering will not intervene. Who is to say that the child you planned and for yearned to have will not become unwell and die, or lose their life in a road accident? As a result of the One-Child Policy, parents in China had similar experiences in recent years when their only offspring were killed in air disasters.

When someone close to you dies from an accident or natural causes, it is possible to come to terms with the grief caused because it’s unavoidable. The decision that some men and women take to have an abortion continues to live with them and, as a result, has side-effects. If people understood the actual reality of what happens in an abortion, they would not allow it to pass into law in Ireland. As we well know, abortion is a highly lucrative industry driven by money. I love Youth Defence. They’re great. I’m sure that abortion would have come to pass long ago in Ireland if weren’t for them.

Our politicians suffer from a very bad case of short-sightedness. They’re only able to focus on five-year timeframes. When will they realise that protecting life in the womb is good for society and the economy?

It shows a distinct lack of imagination and judgment to believe that the 8th Amendment should be repealed. I thought that the medical profession attracted the brightest, most capable minds but I must have been mistaken. On the other hand, the tacit approval doctors give to repeal shows theyre humble enough to see the potential for human error in healthcare. At the same time, though, there’s great monetary profit to be made from the abortion business.

Medicine has supposedly progressed. Yet, children in the womb with treatable conditions such as cleft palate are recommended by doctors for abortion. Too many decisions in hospitals are made on financial grounds and the pharmaceutical industry is over-mighty. It is also fair to say that medical doctors want abortion legalised in Ireland to exonerate themselves in cases of possible negligence. The baby in the womb has no voice and suffers the consequences.

Each and every life is worthy

The grief that I felt led us to move away from where we were living. This helped me to recover and I joined a group for parents who had suffered loss through bereavement. I also retrained as a nurse and returned to the workplace part-time. It is quite apparent that respect for life has gradually diminished in Ireland since the late 1970s and early 1980s. Abortion has become a form of contraception, allowing men and women a quick-fix solution. If only it were that easy.

Each and every life is worthy. Put in perspective, everyone’s life is brief when seen through the ages of time. The best image that I can think of for the 8th Amendment is the little boy with his finger in the dyke holding back the flood. People with disabilities add immeasurably to society. They create the potential for others to do good for them. Therefore, the disabled have a gift to offer us. We are human, not machines. This life isn’t perfect.

My surviving son and daughter are a source of hope. In the early 2000s, my son developed the same rare illness as his brothers but the adult form is not as aggressive. He copes very well, completed his Ph.D. and has a paid job. My daughter is happily married with children, thanks be to God. We are fortunate that this is still a live contemporary issue in Ireland. On holiday here during a previous referendum campaign, a friend who saw the posters, the papers and the news said: “It is great that this is being discussed, because in my country it is legal and no one talks about it anymore.”