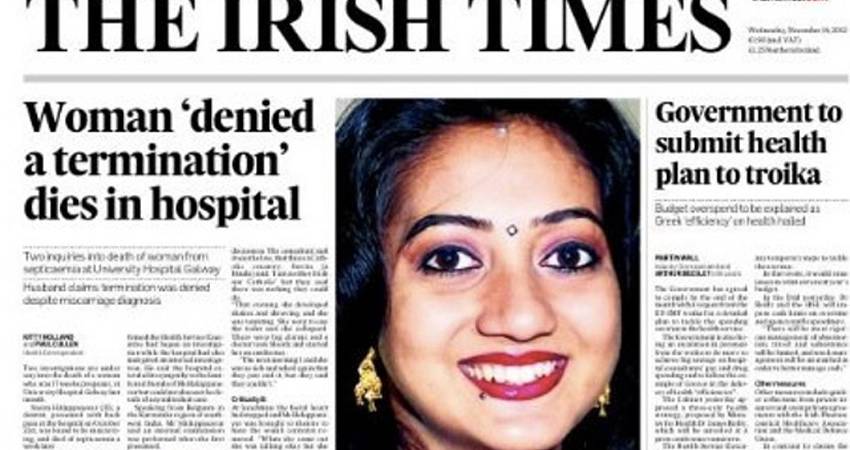 Improved services, not a repeal of the 8th, is needed to prevent outcomes like that of Savita Halappanavar

Savita Halapanavar died on Sunday 28 October 2012, seven days after her admission to University Hospital Galway (UHG), where she was treated on St Monica’s Ward, a gynaecology ward within the Women’s and Children’s Directorate of the Hospital. She was a 31-year-old woman who was 17 weeks pregnant with her first child.

Her tragic case has been held up ever since as incontrovertible ‘proof’ that the Eighth Amendment is a crude barrier to the delivery of effective medical care and that it actively endangers the treatment of women who have received a diagnosis of maternal sepsis in pregnancy.

The contention has been repeatedly made that the Eighth Amendment was therefore substantially if not entirely to blame for Savita’s unfortunate death.

In terms of the public perception of this case, that narrative is now firmly in place. In large part this is due to the cynical manipulation, or more accurately, the dismissal of the findings of the 2013 Health Information and Quality Authority (HIQA) investigation in to the matter.

There is absolutely no doubt that Savita’s death will form a central part of the upcoming referendum debate on the Eighth Amendment.

The message will be clear and consistent; if we want to prevent a repeat of the Savita Halapanavar case we simply have to repeal the Eighth. Only by doing so can we honour her memory and protect future pregnant women from such a fate. The facts demand a different approach.

Indeed to those who insist on continuing to use this tragic case as a proof positive argument for repeal, I would present the following findings from the  2013 HIQA Investigation and follow them up with one simple question: How will repealing the Eighth Amendment prevent such a scenario from reoccurring?

FINDING: “The Authority identified, through a review of Savita Halappanavar’s healthcare record, a number of missed opportunities which, had they been identified and acted upon, may have potentially changed the outcome of her care.”

FINDING: “Following the rupture of her membranes, four-hourly observations including temperature, heart rate, respiration and blood pressure did not appear to have been carried out at the required intervals. At the various stages when these observations were carried out, the consultant obstetrician, non-consultant hospital doctors (NCHDs) and midwives/nurses caring for Savita Halappanavar did not appear to act in a timely way in response to the indications of her clinical deterioration.”

FINDING: “The clinical governance arrangements within the Hospital failed to recognise that vital Hospital policies were not in use nor were arrangements in place to ensure the provision of basic patient care on St Monica’s Ward. These included guidelines relating to the observation of obstetric patients through the use of a maternal early warning score chart and the management of sepsis and pre-term pre-labour rupture of membranes. Furthermore, the healthcare medical record documentation of Savita Halappanavar’s care lacked detail in relation to her clinical status and the potential risk of clinical deterioration at identified times throughout her care pathway.”

FINDING: “The Hospital had a guideline in place for the management of ‘Suspected sepsis and sepsis in obstetric care’. However, the clinical governance arrangements were not robust enough to ensure adherence to this guideline. In addition, clinical staff had not received specific sepsis training in relation to the application of this policy and/or the specific management of a maternity patient with sepsis.”

FINDING: “There was no formal clinical pathway in place to refer high risk obstetric patients to an antenatal high risk service operated by an obstetric anaesthetist at the time of the investigation.”

The 2013 HIQA Report concluded by acknowledging that every day there are patients who receive good, safe care at maternity hospitals right across Ireland. However, the investigation also identified that the provision of maternity services, on occasion, may not be as safe as they should be or of sufficient quality; Where this is the case, this must be addressed as a matter of urgency.”

If we are serious about improving maternal healthcare and achieving even better outcomes for unborn children, then surely this is where our common focus ought to be.