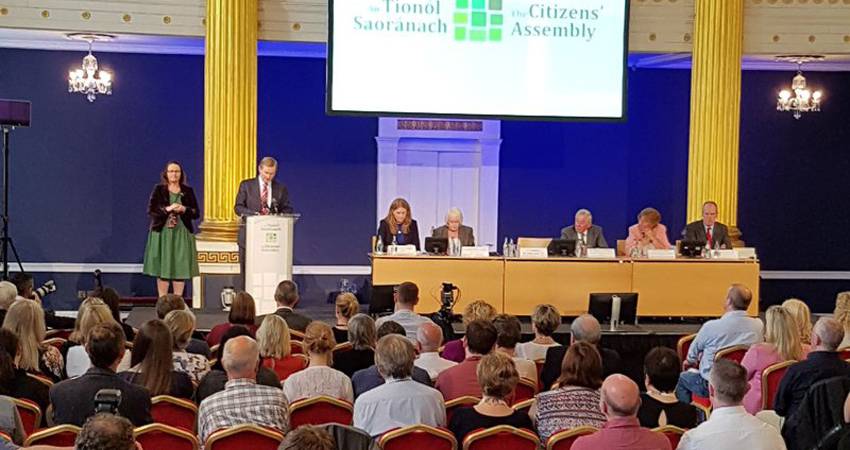 Is the Assembly a farce designed to justify a vote on killing unborn babies?

Most of you won’t be surprised by any assertion that the Citizens’ Assembly is looking more and more like a farce – a farce designed to justify holding a vote on killing unborn babies.

That’s not the fault of the 99 citizens which make up the Assembly, many of whom no doubt have pro-life views and are decent people, but it’s increasingly clear that this process, like others concocted by Enda Kenny, already has a pre-ordained outcome.

We’ve been here before, in 2013, where two ‘consultations’ on abortion took place in rapid succession – and where the evidence was then roundly ignored.

Despite the fact that every expert witness agreed that abortion was not a treatment for suicidality, Enda Kenny’s government pushed through legislation permitting abortion on suicide grounds.

This time however, Fine Gael can’t just bully legislation through, and the polls are telling them that Irish people don’t want abortion on demand, so the Assembly is all about justifying a decision to have a referendum to repeal the right to life of preborn babies.

It has been obvious from the beginning that the citizens attending the Assembly were going to hear a lot from sources which were neither disinterested nor neutral. The Independent TD, Mattie McGrath, has already raised questions about the impartiality of two witnesses who spoke at its first sitting.

He pointed out that Dr Declan Keane had told a constitutional committee back in 2000 that he supported abortion where the baby had a life-limiting condition – a topic of special consideration for the Assembly. He also noted that, Deirdre Madden, a lecturer from University College Cork had previously supported research on human embryos.

These are hardly impartial experts then, but that information was not relayed to the Assembly members.

That first sitting also heard from Janice Donlan of the HSE who, amongst other things, presented research carried out by abortion pill providers, women on web, and from Dr Brendan O’Shea who told attendees that the pro-life 8th amendment was “not satisfactory not helpful” for women facing an unexpected pregnancy.

The unborn baby was barely mentioned in that first sitting of the Assembly, a continuation, as it were, of the absurd and unreal media debate on abortion in this country, where everything is discussed except the baby whose life is so brutally ended. Of course, the fact that the experts ignoring the existence of the baby were meant to be impartial undermined the objectivity of the Assembly organisers from the first sitting.

At the second sitting, Justice Mary Laffoy opened the procedures by announcing that the outdated and discriminatory phrase ‘fatal, foetal abnormalities’ would be used in the discussions.

As parents from Every Life Counts pointed out in an open letter to Ms Laffoy, the term is has not medical meaning, is not found in any medical textbook, dehumanises preborn babies with a disability, does not provide any clarity to the debate, and causes unnecessary offence and hurt to families.

These parents have asked Ms Laffoy for an opportunity to speak at the Citizens Assembly. To date no such invitation has been forthcoming.

Ms Laffoy’s decision to use the loaded term favoured by abortion campaigners was immediately thrown into sharp relief by the evidence of Dr Mc Parland of the National Maternity Hospital who said the words fatal or lethal were not used by him in these situations.

Dr McParland made for an interesting witness, who acknowledged both the preborn baby as a patient, and the reality of abortion, saying that the ‘the baby does not come out intact’ – a reality the Assembly had not heard until that point.

There was also a robust debate between Dr Helen Watt of the Anscombe Bioethics Centre and abortion supporter Prof Bobbie Farsides on the moral status of the unborn baby – almost the first serious attention given to the person whose life hangs in the balance.

As Dr Watt pointed out, “any baby, born or unborn, has objective interests in her own future life” and the human rights of the baby were not affected by terminal illness. She also praised the contribution of Irish support groups for parents of babies with life-limiting conditions.

As I’ve said before, the basic premise of the Citizen’s Assembly is absurd, because the right to life is recognised by Article 40.3.3 – that right cannot be granted or taken away, is it an inherent and inalienable right belonging to every one of us. Enda Kenny cannot take it from me, nor I from him. Neither can any convention take away that right from a preborn child.

Yet, we have a government-appointed assembly that is being asked to recommend which children can live and which can be killed with legal impunity. It’s like a 21st century Coliseum, a collection of randomly selected citizens giving the thumbs up or down to innocent children, depending on the categories they deem fit to be deserving of life.

But Enda Kenny has a process, and he believes it can work for him again. It’s evident that there are many in Fine Gael who support legalised abortion, such as Kate O’Connell who told TV3 last week that her views were in line with the abortion extremists in the AAA/PBP seeking abortion on demand.

Others such as Paschal Donohue and the hapless Health Minister Simon Harris have already signalled their certainty that the Assembly will opt for a referendum to repeal the 8th.

The problem for Kenny, and for the abortion campaigners so eager to allow the killing of helpless babies, is that, unlike in 2013, this must all come to a real vote – a referendum of the people.

It’s important to remember that the really significant discussions on abortion are now taking place, not in the Assembly, but on doors, on the streets, in the public square, and with ordinary people.

If you want to Save the 8th, ignore the Citizens Assembly and join the outreach that is actually reaching real people with real information.

Join the Life Canvass  and make this the year we #SaveThe8th. Leave political farce to those who are interested in the same.