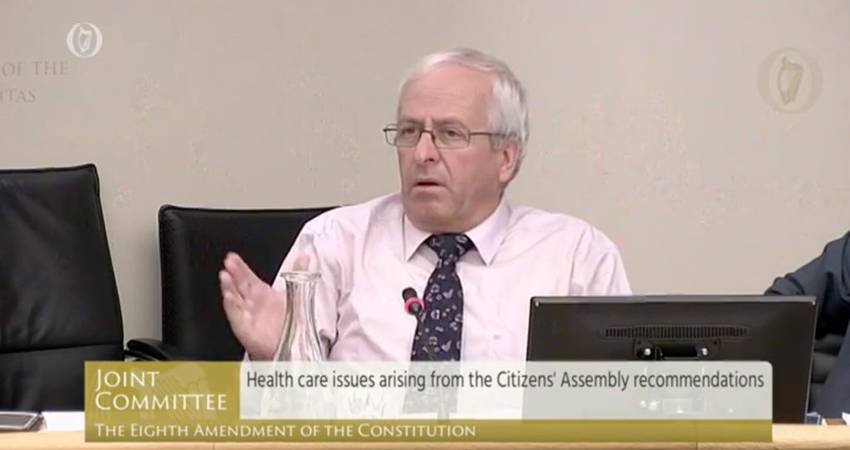 It was a telling moment at the farcical and, to quote Professor Patricia Casey,  “deeply imbalanced” Abortion Committee hearings.

To date, all of the medical professionals who had been chosen by the largely pro-abortion TDs on the Committee, had spoken in favour of legalising abortion.  Not one pro-life doctor had been asked to give evidence.

Dr Fergal Malone of the Rotunda appeared before the Committee on October 11th.

He wanted abortion legalised on disability grounds, without limit as to term, and he was against providing an “inclusive list” of conditions for which he believed babies could be aborted.

Shocking stuff. But there was worse to come.

“Dr Malone, you told the Irish Examiner that in the majority of cases in the Rotunda Hospital where babies had been diagnosed with anencephaly or trisomy 18, parents travelled to Britain for an abortion. That is in sharp contrast to the findings of research from Cork University Maternity Hospital where more than 90% of parents who had received a diagnosis of trisomy 18 continued with the pregnancy. Cork University Maternity Hospital also found that most parents continued with the pregnancy after a diagnosis of anencephaly. What is the Rotunda Hospital doing wrong? Do parents feel unsupported in the hospital?”

Malone responded by saying that he didn’t want to comment on what was being provided by other hospitals but he then said that he could tell the Committee that “about 57% of our patients with a prenatal diagnosis of Down’s syndrome do travel for a termination of pregnancy”.

57% of babies who have Down Syndrome diagnosed in Dr Fergal Malone’s hospital, the Rotunda,  are then aborted in Britain.

What on earth would the percentage be if abortion was available in the hospital? We probably know the answer to that already, given that in Britain some 90% of babies with Down Syndrome are aborted.

Dr Malone added that about 50% of parents with a diagnosis of Trisomy 18 travel for a termination of pregnancy – which was obviously a shocking contrast to the figures just quoted by Mattie McGrath, where less than 10% felt compelled to do so in Cork University Maternity Hospital. Dr. Malone claimed:

“To me, this demonstrates absolutely good and balanced counselling of patients, One cannot get any more balanced that."

It’s worth noting at this point that Fergal Malone has spent a considerable portion of his career working to develop more accurate screening for disabilities in preborn children, while the Rotunda states that he was “responsible for implementation of a national first trimester screening programme for fetal abnormalities, such as Down syndrome”.

Mattie McGrath also asked Dr Malone if he was “aware of findings of a study by Duke University in 2015, published in the peer reviewed journal Prenatal Diagnosis, which showed that women who underwent an abortion after a diagnosis of anencephaly were significantly more likely to suffer from depression and even despair than those who continued with the pregnancy?”.

Malone came back attacking the evidence. He said:

"The Deputy referenced the study in Prenatal Diagnosis, I am very familiar with the study by Cope and colleagues that suggested that there was an increased incidence of various mea­sures of psychological trauma or upset after they terminated for various abnormalities. I would not accept that paper as being a good example to learn from. When one looks at the methodology in that paper, one can see that many of the patients who were recruited came from social media campaigns or were tracked down or recruited through social media. .... If one recruits patients who might have a certain viewpoint already and go to social media to recruit them into the study, it is not all surprising if the results are in a particular direction. The unbiased recruitment of patients is crucial to any science in any speciality."

Despite being applauded by Senator Jerry Buttimer who had the nerve to accuse Mattie McGrath of “glibly” quoting “reports” and implying that this was being done in a “dishonest manner”,  Malone was wrong on several counts.

Firstly, the study only examined outcomes after diagnoses of anencephaly, not ‘various abnormalities'.  As Mattie McGrath later put on the record: the research he referred to was performed at one of the premier universities in America, and the world, and it was published in a respected peer-reviewed medical journal, Prenatal Diagnosis.

Secondly, any careful review of the study would have revealed that the authors recruited the majority of participants from a pre-existing study database, The Hereditary Basis of Neural Tube Defects study conducted at Duke University Medical Center. Only approximately 1/3 of the participants originated from social media.

Thirdly,  as Mattie Mc Grate confirmed “an objective reporting on the study would recognize the authors reported a possible bias based on the recruitment source, did recognize that there was a difference in severity of symptoms in the two groups, and recognizing this potential influence on results, made source of referral a covariate in the analysis to limit the source impact.”

It was important to remember, Deputy McGrath continued, “that Cope et al. is a comparative study of women and their outcomes after terminating or carrying a child with anencephaly to term. It is not, as some might believe after listening to the Deputy, or Dr Malone, simply a report from women recruited from social media who carried a child to term with anenecephaly. This study offers important insights into outcomes for women after termination of pregnancy following a diagnosis of anencephaly, in contrast to outcomes where the pregnancy was continued. To dismiss this study is scientifically unreasonable, but it might be understandable if there were significant data to suggest that termination of the life of an infant with anencephaly had no impact on mothers or improved the mental health of mothers later in life. The fact is there is no such study, and all we are left with is the unsupported opinions of those who are committed to the expansion of abortion services.

“It is dismaying to see anyone being dismissive of research identifying poor mental health outcomes for women related to abortion after a diagnosis of anencephaly simply because they don’t suit a pro-abortion narrative.”

Well said, Deputy McGrath. The evidence is what it is. And now we know that in Dr Fergal Malone’s hospital, in a country where abortion is illegal, 57% of babies diagnosed with Down Syndrome go onto have their lives ended in an abortion clinic in Britain.

We need to decide if Ireland is going to join so many other countries in the eradication of people with Down Syndrome – or if we are going to ask the hard questions and challenge those who believe that children with a disability have less of a right than other babies.