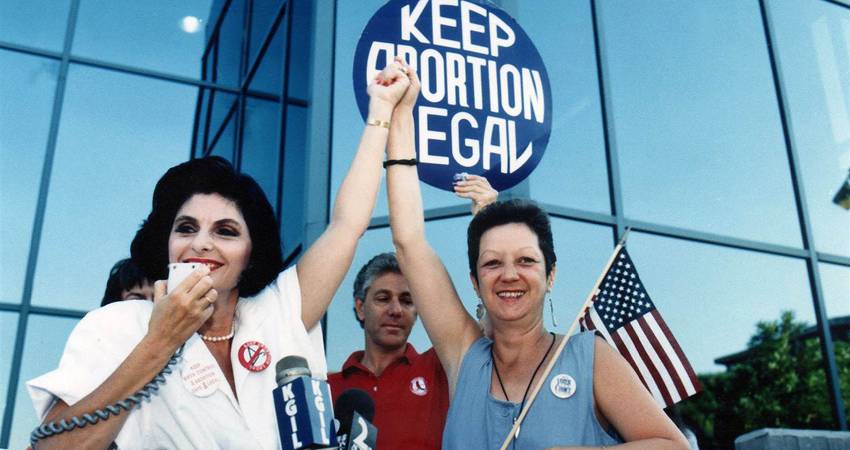 Earlier this year, Norma McCorvey, the plaintiff in the Roe vs Wade case passed away. She had spent decades, in her own words, “dedicated to undoing the law that bears my name”.

However, abortion campaigners immediately began to misrepresent her involvement in the case which had legalised abortion through all nine months of pregnancy. Maria Horan took them to task in this open letter to the Abortion Rights Campaign.

I felt that I just had to clear some issues up regarding your deeply misinformed article on “Plaintiff in Roe vs Wade” (22 February). Dear, oh, dear. Where do I begin?

If Norma McCorvey were to see your article, she would not thank you for it. In fact, it is probable that she would be turning in her grave.

Let me explain why.

1. Perhaps you weren’t aware of this fact, but Norma McCorvey never actually had an abortion. The child (not, by the way, a “clump of cells”) around whom the Roe vs. Wade case was built, was already a toddler by the time the case reached the Supreme Court in 1973. Norma gifted her daughter for adoption.

2. Back in the early 1970s, Sarah Weddington was an ambitious lawyer looking to further her career and was seeking a pawn to help her make her name.

At this point, McCorvey was an impoverished and vulnerable woman who had left an abusive marriage and had already started to suffer from addictions that she would endure all her life.

3. In order to ensure that Roe vs. Wade would become law, McCorvey was coerced into lying about the circumstances of her pregnancy. She had not been gang-raped but was poor, unemployed and unmarried. She never even appeared in court during the case. However, Sarah Weddington and Linda Coffee did not offer McCorvey any assistance out of her predicament and dissuaded her from obtaining an abortion, even an illegal one, as they needed her pregnant for their case. After the Supreme Court case, McCorvey was promptly discarded by both lawyers.

4. In 1987, a pro-choice student leader called Melissa Clement invited Weddington to lunch where Sarah regaled the young students with her tales of Roe vs. Wade. When Melissa asked Sarah what had happened to “Jane Doe”, Norma McCorvey, Sarah replied: “She’s a stupid piece of white trash. She’s pro-life and a Christian,” she snarled throwing in a few decidedly ungracious and unrepeatable curse words. “She’s a piece of trash. She was stupid when we found her and she’s worse now.”

That night, Melissa saw how anti-woman and callous the pro-choice movement was and she had nothing more to do with it. And what became of that young, pro-choice university student leader? Clement is now President of Nevada Right to Life.

5. After spending twenty years as a vocal pro-choice advocate, McCorvey became avidly pro-life and grew to regret her involvement in the Roe vs. Wade case, spending the rest of her life trying to repeal the Supreme Court decision, which she said was based on a lie. In many ways, she felt personally responsible for the over 57+ million deaths that have occurred since the USA legalisation of abortion in 1973. She remained passionately pro-life until her death. When Melanie McDonough met her in London in 2010, McCorvey “was gently insistent on one thing, which is that she felt ‘manipulated and used’ by groups campaigning for abortion. She said, quite emphatically that ‘supporting abortion was the biggest mistake of my life’.”

Isn’t it odd that all the facts that I have stated above are missing from your article?

Mind you, I can only conclude that you weren’t aware of the above details, because most pro-choice blogs and websites have actually declined to even comment on McCorvey’s death, as it would mean having to acknowledge that she became ardently pro-life after Roe vs. Wade. So most of them chose to say nothing at all and “ignore” her passing instead.

And I thought the pro-choice stance didn’t believe in censorship?

Hint: before you write your next “article”, please inform yourself of all the facts, not just the ones that are convenient to you. It looks sloppy and misinformed when you fail to tell the full story. And seeing that you presumably have access to the internet (one can only hope), might I suggest you make better use of it next time?

And please, would you kindly refrain from the use of “anti-choice”. As well as being childish and rather petulant, it is quite obvious that those offering choice are actually “pro-life”. Even your own website rushes towards abortion, while glossing over the “other choices”.

P.S. Might I also suggest that you “update” your sadly outdated version of pro-life feminism? Please feel free to peruse the attached link: The future of pro-life activism is young, female, secular, and “feminist”.

You really must try and keep up with the modern pro-life movement, not the 1973 version.