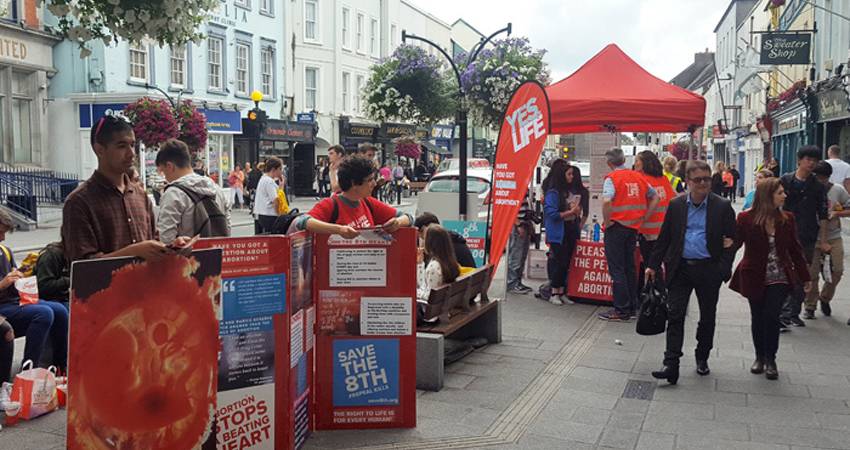 As most of you will know, Youth Defence has always worked to reveal the reality of abortion. For the past twenty five years, this has been part of our central mission, because if we are to have real and meaningful public debate on this issue, then we cannot allow that reality to remain hidden.

In order to justify the killing of preborn babies, the media and abortion campaigners deny both the humanity of the child and the cruelty of abortion. In Ireland, however, they have not succeeded in framing the debate in this way, because our pro-life outreaches have ensured that the Irish people know what abortion is, and are increasingly understanding that we can provide a better answer than abortion. It is remarkable that, despite the extraordinary media bias, polls show a significant majority of Irish people remain opposed to abortion on demand, and open to the pro-life position that knows abortion is never the answer.

Every weekend, for twenty five years, in Dublin and in other busy centres, we’ve made the reality of abortion a crucial part of our information events. Our long and productive experience in public engagement has taught us that abortion reality should be presented as part of an education and awareness outreach. So our information boards show the beautiful photographs of the baby in the womb, and the evidence that abortion hurts women; they share medical facts and personal stories; and they also show the sad, inescapable reality that abortion kills a baby.

Abortion campaigners want these photographs censored because they reveal what abortion really is – an act of violence that kills a baby and harms a woman.

The real meaning of the empty slogans and vague demands to ‘repeal the 8th’ is revealed when we look at what abortion does to a baby. Our long experience – we’ve held more than 2,000 street sessions – means we know that showing abortion reality photographs as part of our educational outreach ensures the people know that this is about information not confrontation. Very often that means that hearts and minds are changed, and, most powerfully, women who had booked abortions went on to have their beautiful babies.

As most of you will also know, the right to show the reality of abortion was hard won. In the past, Youth Defence members were repeatedly arrested, dragged along the streets, strip searched, brought before the courts, and attacked in the media but they persevered. The acknowledgement finally came from the Director of Public Prosecutions that the photographs were not unlawful under the Public Order Act as had been claimed by Gardaí and other commentators. On occasion, though thankfully now very rarely, Gardaí act unlawfully to take our pro-life boards, as happened several years ago in Galway. In that case, the Superintendent acknowledged that the gardai had acted badly and apologised for what happened.

Now the Gardaí in Kilkenny have also acted unlawfully to seize our pro-life boards. We are dealing with this matter and also continuing with our pro-life work undeterred by the incident in Kilkenny.

6 days after the outrageous seizure of our pro-life boards, we were back on O’Connell Street with our pro-life street session, and our powerful Save the 8th message, which includes showing the reality of abortion.

Some excitable and misleading commentary has been circulating suggesting that Youth Defence might withdraw from showing the reality of abortion in our mission. This is nonsense, and our supporters will know that we have never been deterred from our work by threat of legal action or by heavy-handed policing.

We are focused, as we all should be, on the campaign to Save the 8th amendment, a campaign that polls show is having a real effect. We can win this battle to protect mothers and babies, by using a multi faceted strategy that will win hearts and minds and Save the 8th.