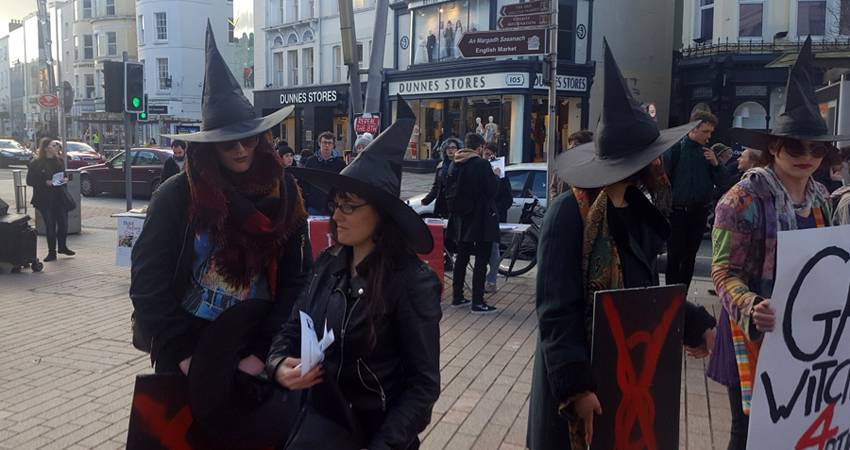 "Witches for abortion" and other abortion bus madness

I wondered this week if we had reached peak repeal madness when the self-described ‘witches for abortion’ came out to meet the fake abortion pill bus in Cork. But we can probably all be quietly confident that, trapped as they are in a deluded bubble where fawning media coverage is always guaranteed, abortion campaigners will continue to alienate ordinary decent people in droves. For that, of course, we can be eternally grateful.

The abortion bus got the usual dollops of eager media publicity for weeks before it set off on its ‘more abortion now’ tour, and there was much defiant talk of how they would break the law to ensure desperate women got pills which might kill them as well as their babies – instead of getting help and support which might help them through a crisis.

Turns out that this was yet another piece of fake repeal news since the not-so-feisty abortion supporters would not be actually carrying any abortion pills on the bus, but would just be touring the country shouting and roaring about abortion instead.

Much to their chagrin, they were trailed on the entire trip by the Irish Centre for Bioethical Reform, who followed the abortion bus on their own pro-life bus (a face-off that Pat Kenny described as the ‘battle of the busses), and also used large photos of the reality of abortion to ensure the reality of the euphemistic ‘repeal the 8th ‘slogan was revealed.

Yes, the reality of abortion is not nice…

The repeal-the-right-to-life crowd were also joined at every stop on their tour by pro-life protestors from Youth Defence, Limerick Pro-Life Network, and other groups who spelled out that the abortion campaign was endangering women and killing babies.

A message of love… not hate…

So in Cork, abortion supporters responded by coming to meet the abortion bus dressed as witches – with pointy hats, broomsticks –  and mad signs including this one declaring them to be ‘Gay Witches for Abortion’.

Halloween is not for another couple of months…

A spokeswoman later told 96fm that they were being ‘creative’ but to the average shopper in Cork city centre that day, they simply looked deranged. Of course, the media are always careful to exclude the increasingly bonkers nature of pro-abortion protests in their reporting, just as they were careful to ignore the truly vile and disgusting tweet from an Abortion Rights Campaign spokesperson who wrote that she was glad Peter Mathews, the former TD, was dead, because the man had pro-life views.

So after two days of mostly shouting at pro-lifers, the fake abortion-pill  bus returned to Dublin to the equally fake ‘strike’ for repeal, which according to the Irish Times, or, as it should be called The National Abortion Campaign Daily, attracted less than 1,000 people, while a march later only mustered 2,000.

Even the IFPA, the Irish branch of the world’s biggest abortion provider, didn’t strike, as we found out when we rang to ask. (Comrades, what are you like? If only the gulags were still operating).

When the march for repeal reached the Dáil, some loud and angry men (who seemed to have had their right to an opinion on abortion restored by some higher pro-abortion power despite their obvious lack of a uterus) chanted ‘Repeal the 8th. F**k the state’ – a slogan they no doubt believe is  guaranteed to reassure the middle-ground and persuade them that preborn babies should be killed all the way to birth on the grounds of ‘choice’.

The failure of the fake strike for abortion to make a real impact is significant given the huge media support and endless funds abortion campaigners receive from abroad. But leave them at it. In the meantime, we’re training and organising thousands of activists to go door-to-door on the Life Canvass, and changing hearts and minds by sharing stories and information with ordinary people every day. We’ll keep at it, and while they are busy reaching peak repeal madness, we’ll stay busy protecting mother and baby by saving the 8th.