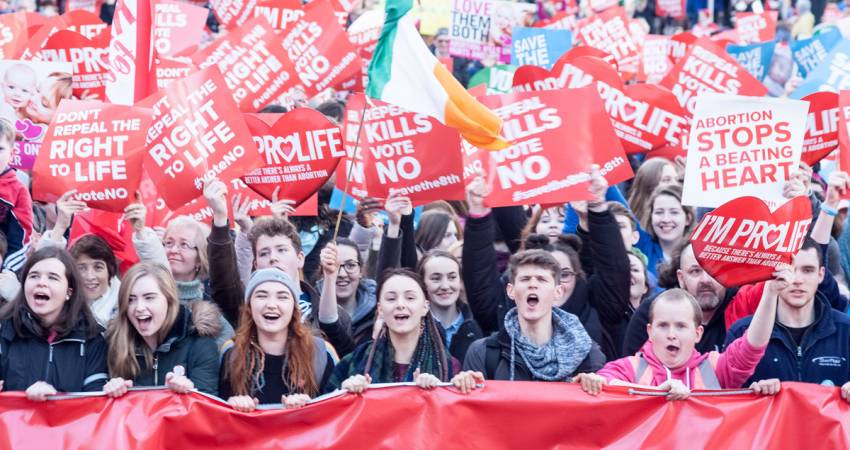 A Record-breaking Rally, Now Take that Energy and Momentum to the Doors to Save the 8th

What an unforgettable, momentous, historical day. 100,000 Irish people rallied, in the biggest march in living memory, to save the lives of preborn children and demand a better answer than abortion.

As was widely reported, Dublin city came to a standstill as the huge, diverse crowd thronged O’Connell Street, and stretched from Parnell Square almost to Merrion Square in a glorious, colourful display of pro-life energy. It was truly inspirational.

The past week has seen a growing realisation across the government, the media, and even amongst abortion campaigners, that the pro-life side possesses a level of passion and organisation that the pro-abortion side simply lacks, and that the tide is turning against the repeal of the 8th amendment.

The massive gap in impact between the two sides was even noted this week in the Sunday Business Post.

The article, headlined ‘Repeal side urgently needs to make its case’, stated that the save the 8th side “is so far eclipsing a variety of repeal groups that lack coherence and unity…a corresponding level of organisation is not evident on the pro-choice side, a fact noted by senior political operatives”.

On one hand this is excellent news for our campaign, it shows us that even the greatest supporters of removing all protections on the right to life of the unborn, the government and the media, are now seeing the impact of all of our work, and they are now seeing that we will not simply rollover and let their assault on the most vulnerable of all go ahead unopposed.

On the other hand, we need to be very careful that we guard against complacency because we now have to double our efforts for the next 10 weeks to Save the 8th.

Our Life Canvass – supported by Family & Life, Youth Defence and 63 local groups – has received a huge boost from the Rally and it’s now more important than ever.  Abortion campaigners are backed by most of the media, by our journalists, by the government, and by the foreign funders whose money many of them have taken. They can afford to make mistakes, to be lazy, to be disorganised, whilst we simply cannot afford to give anything less than our all, to be anything other than perfect.

The Rally for Life, which was the biggest Rally for Life ever in this country, with the Sunday Independent and other reporting 100,000 in attendance, will remind the public that there are more people in this country who care deeply for the right to life of preborn children than those who oppose it.  And it has hugely energised and motivated pro-life people everywhere.

We have 10 weeks left. Stand in the gap for mothers and babies and we will win this battle to save the 8th.