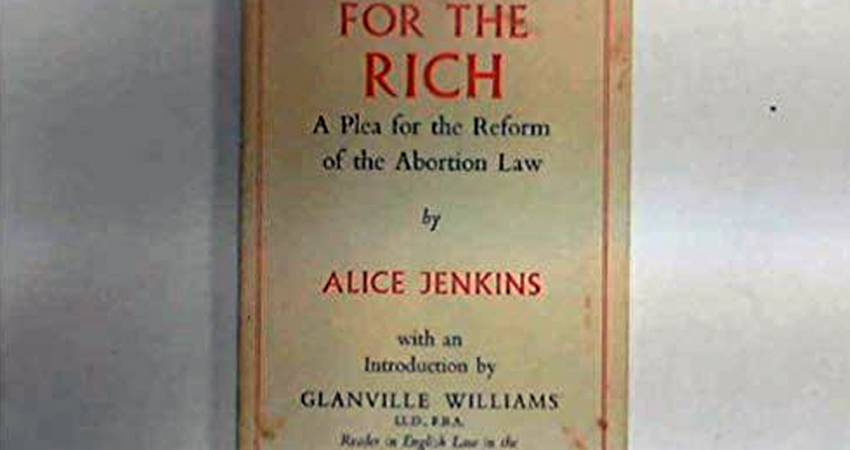 As is widely known, abortion was legalised in practice in Great Britain by the Abortion Act of 1967, passed as the result of a Private Member’s Bill introduced by Liberal MP David Steel. Steel had been persuaded to do so by the Abortion Law Reform Association (ALRA) and, in a 2007 interview with The Guardian, he singles out a book by Alice Jenkins, one of the ALRA’s founders, as particularly influential on him:

‘His decision was reinforced, Steel recalls, by his reading of Alice Jenkins’ polemic, Law for the Rich, which highlighted how rich or educated women were getting round the abortion ban by claiming their life was threatened by the danger to their mental health.’

But Jenkins’s book was more than simply a plea for legalised abortion. It was also an anti-Catholic, anti-Irish tract:

‘Roman Catholic congregations are amongst the most poverty-stricken sections of the community; their numerical strength is growing and their poverty is intensified by their large families. Most people believe in free speech and a free Press, and the Roman Catholic Church has the right to voice its opinions. But we may well ask why it is allowed to exercise so much indirect and often insidious influence in our country, out of all proportion to its numbers. We are told that in 1958 the number of Irish immigrants from Eire was estimated to be 60,000. The number of marriages solemnised in Roman Catholic Churches in this country is greatly increasing, and, if this trend continues, it looks as though there might be a reversion to Roman Catholicism within 150 years. So it is later than we think ! Far too few leading British newspapers concern themselves with this danger…’ (Alice Jenkins, Law for the Rich, Victor Gollancz, London, 1961, pp. 43-44).

In support of her view, Jenkins quotes another book, Your Future is Now by W.J. Thorne:

‘Never since the Elizabethan settlement have there been so many practicing Catholics in Britain, and each year the supply grows as boatload after boatload arrive to seek a higher standard of life. It is not necessary for the Catholics to constitute a majority for their Church to exercise a decisive influence. The power of a united, well-disciplined, numerous minority operating amongst hordes of unattached individualists is usually sufficient to secure de facto power. We can be thankful that the Catholic ‘interest’ has not been formalised in England by the creation of a separate political party. It has achieved that distinction in some other countries and the results are not pretty. The English being what they are, the Roman Catholics get more of their own way by not seeking representation in Parliament, and the Hierarchy may be expected to rely on the existing policy of permeation. Still, a point may be reached when the unravelled majority may find sufficient negative unity to prevent the creation of anything resembling a Catholic state.’ Jenkins adds: ‘To which we can only rejoin “Let us fervently hope so !”‘ (Jenkins, pp. 44-45). She also asks rhetorically ‘How can a Protestant nation be expected to accept dictation from a doctrinal minority ?’(Jenkins, p. 43)

The cause of legalised abortion has been from its inception up to the present day closely bound up with eugenicist, Malthusian and Social Darwinist concerns to reduce the birthrate among, and births of, ‘undesirable’ or ‘defective’ people, which in the US included in particular black people, but in Britain was above all the poor and the disabled (and poverty was widely assumed by supporters of the cause to stem from the ‘feeble-mindedness’ of the poor, so that the two groups were not viewed as distinct). The fear was that the ‘overbreeding’ of these groups would ‘swamp’ the ‘better sort’ of people; encouraging abortion of, or among, the poor and disabled was a way to prevent this (see Ann Farmer, By Their Fruits: Eugenics, Population Control and the Abortion Campaign, Catholic University America, Washington DC, 2008). Hence, the 1967 Abortion Act specified disability of the baby as grounds for abortion, and it has served largely to wipe out people with Down’s Syndrome and other disabilities in Britain ever since.

Madeleine Simms, one of the principal ALRA activists behind the 1967 Abortion Act, dedicated her 1971 book Abortion Law Reformed (known as ‘the “official” ALRA account of the Abortion Act’), to ‘thalidomide mothers for whom reform came too late’. This was a reference to the babies who had been born disabled after their mothers had taken thalidomide to treat their morning sickness, which had resulted in a spate of births of such disabled babies in the late 1950s and early 1960s – a trauma that helped precipitate the Abortion Act. Simms’s assumption was that any mother with the choice would have wanted to abort such babies.

Nevertheless, as Jenkins’s book showed, the modern ideologies of eugenics and Social Darwinism could readily coexist with the traditional English paranoia and hostility towards the Irish and the Catholic Church; they too were the supposed demographic threat that legalised abortion sought to counter.

That abortion was legalised in Britain at the initiative of a politician under the influence of an aggressively anti-Irish, anti-Catholic tract is already remarkable. But it is truly incredible that the Republic of Ireland may vote in a few days to emulate Britain, its former colonial master, and remove the constitutional protection for unborn children from its constitution, given the anti-Irish and anti-Catholic roots of legalised abortion in Britain. Jenkins may have hoped that her tract would help counter the supposed Irish Catholic threat in her own country. But that her ideology would then spread across the Irish Sea to combat Irish Catholic breeding in the Republic of Ireland itself would no doubt have seemed a success beyond her wildest dreams.