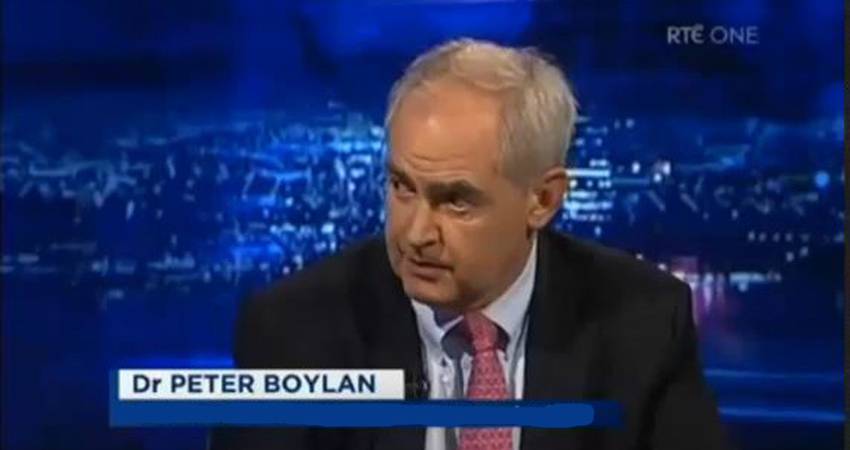 NO SURPRISE THAT ABORTION-DOCTOR-IN-CHIEF IS PETER BOYLAN

Well, you could have knocked us down with a feather when Simon Harris welcomed Peter Boylan as his Abortion-Doctor-In-Chief, with the task of rolling out abortion services across the country.

Only joking, of course, everyone saw that one coming.

While the Health Service Executive made the appointment everyone knows that Harris would have had no other man for the job. (And yes, it is a man, because despite all the chatter about championing women, we have a male Taoiseach, a male Minister for Health and now a male ObGyn laying down how all this is going to operate. They have decided that abortion is the best thing for women including all those pesky baby girls who are inconvenient and poor and generally unwanted.)

So Boylan was the obvious choice. After all, this was the man who repeatedly made untrue and unfounded claims during the debate, and who had no qualms using the establishment's weapon of choice in referendum campaigns: fear.

What’s the best way to frighten people into voting for abortion? Tell them women are dying. Boylan went as far as to say that Sheila Hodges, who tragically lost her life when her cancer went untreated, died because of the 8th amendment.

Ms Hodges lost her life before the 8th even became law. Clearly Boylan, a senior campaign spokesperson, was either horribly mistaken or was being wilfully misleading.

Did it matter? Not a bit. The media rushed to cover up his mistake, just as they played down his disastrous outing on Joe Duffy’s LiveLine when he was forced to admit that unborn babies were already being screened for Down syndrome as early as 9 or 10 weeks.

There was no follow-up from the media, who, is it worth reminding ourselves, actually were the Yes campaign. No hard questions were directed Boylan’s way.

Then there was the time during the Clare Byrne Show debate when he flatly denied that a preborn child was fully formed at 12 weeks, prompting Dr John Monaghan ObGyn to read the following from the NHS website on the developing baby : “By the end of the third month your baby is fully formed, all the organs and extremities are present and will continue to mature in order to become functional, the circulatory and urinary systems are working and the liver produces bile.“

"There is nothing new after 12 weeks…it is fully formed,” Dr Monaghan said, adding that if Boylan didn’t know this stuff ‘he needed to go back to school’.

(The media nearly lost their minds. The papers were full of articles lamenting that the No side had won the Clare Byrne debate handily, and proclaiming that This Could Not Be Allowed To Continue. Pat Kenny rushed Boylan into the Newstalk studio for a deferential interview the following day  to repair the damage.)

On the day before the vote, Boylan was featured in the usual soft interview on RTÉ News where he claimed that “you can’t do anything” to help families where a baby had a life-limiting condition without repealing the 8th.  The “only way” to help those people was to vote Yes, he insisted

Really? You couldn’t offer perinatal hospice care which parents say makes the loss and heartbreak after such a diagnosis much more bearable? You couldn’t offer support and understanding to bring baby to term and ensure those families had the gift of time with baby which brings healing? You couldn’t ensure that the parent’s desire to have their baby’s life valued was respected and supported? No wonder parents say they have felt pushed towards abortion if that’s the culture that dominates in Irish maternity hospitals.

And now the same Dr Boylan is in charge of Simon Harris’ abortion service. As the body count inevitably rises, we will at least know that one thing hasn’t changed in our new, shiny, progressive Ireland.

It’s still a case of jobs for the boys.