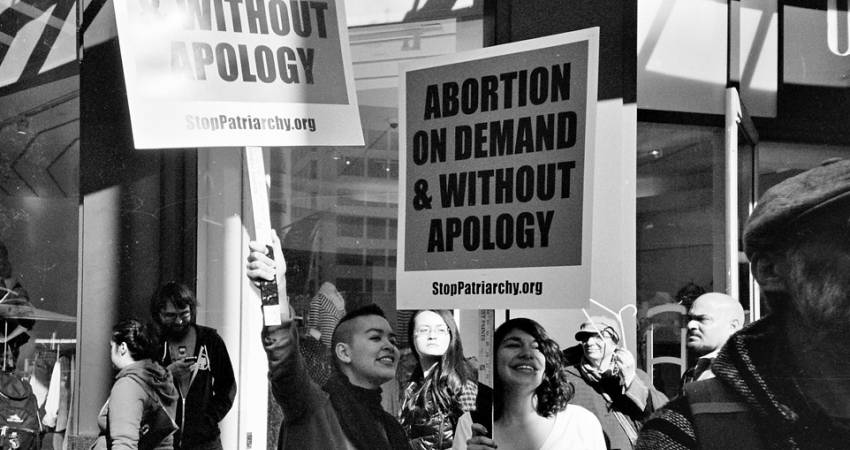 Abortion activists are staking out a new position: Abortion is killing, and it is good

A couple of weeks ago, I wrote a column on the recent trend of abortion activists claiming that abortion was not only necessary, but good. Many of them, in fact, actually went a step further and claimed that abortion was actually beautiful. It appears that they are doubling down: Abortion on demand, without apology—and we love it, too. From Jessica DelBalzo at Rewire News:

I love abortion. I don’t accept it. I don’t view it as a necessary evil. I embrace it. I donate to abortion funds. I write about how important it is to make sure that every woman has access to safe, legal abortion services. I have bumper stickers and buttons and t-shirts proclaiming my support for reproductive freedom. I love abortion.

And I bristle every time a fellow activist uses a trendy catch-phrase or rallying cry meant to placate pro-lifers. The first of these, “Make abortion safe, legal, and rare!” has been used for decades as a call for abortion rights.

Safe and legal are concepts I fully support, but rare is something I cannot abide. I understand the theoretical mindset: it is better for a woman to prevent an unwanted pregnancy than to bear the physical and financial burden of an abortion. While my own abortion involved very little pain and a minimal financial expense, one which my ex-boyfriend was willing to share with me, even I can admit that using condoms or the pill is preferable to eight weeks of nausea and weight gain. Contraception is a valuable tool.

However, there is no need to suggest that abortion be rare. To say so implies a value judgement, promoting the idea that abortion is somehow distasteful or immoral and should be avoided. Even with affordable, accessible birth control, there will be user errors, condoms that break, moments of spontaneity. The best contraceptive access in the world won’t change the fact that we are merely human and imperfect in our routines…

Suggesting that abortion be “safe, legal, and rare,” and crowing that “no one likes abortion,” accomplishes nothing for women’s rights. Pandering to the anti-choice movement by implying that we all find termination distasteful only fuels the fire against it. What good is common ground if it must be achieved at the expense of women who have had or will have abortions? Those women need advocates like us more than we need support from anti-abortionists. Rather than trying to cozy up to the forced-birth camp, women who value their freedom should be proud to say that they like abortion. In fact, they should venerate it whole-heartedly. Abortion is our last refuge, the one final, definitive instrument that secures our bodily autonomy. What’s not to love?

We are reaching the point at which most abortion activists are accepting the inevitable conclusions of their views and promoting them wholeheartedly. Pro-life activists used to corner abortion activists in debate by asking why abortion should be rare if it was a morally neutral act. This would often cause great discomfort among pro-choice audience members who realized that, as DelBalzo admits here, that to be uncomfortable with any abortion—as long as it is freely chosen—is to confess that there is something about abortion that makes it quite different from other surgical procedures.

Now, abortion advocates are owning their position: That developing human beings in the womb can be destroyed to enable their version of women’s liberation. Ilyse Hogue of NARAL Pro-Choice America announced to cheers—cheers—at the 2016 Democratic Convention that she’d had an abortion. Actress Michelle Williams received a similar response from the Hollywood elites at the Golden Globes when she hefted her trophy and told the crowd that, “I wouldn’t have been able to do this without employing a woman’s right to choose.” At the 2017 Women’s March, which I attended as a journalist, nearly every mention of abortion by the speakers received rousing cheers from the thousands of assembled protestors.

This shouldn’t be a surprise. Abortion activists were never going to win the argument that the baby in the womb was not a human being, especially as science and technology provide us ever-better methods of looking into the womb and glimpsing the world of the pre-born child. Surgeries are being done on babies that it is legal to abort, and we can keep premature babies alive at earlier and earlier stages. Ironically, many abortionists have been up-front about their work for some time, and many of them frankly admit that what they are doing is killing.

The lines of the debate are changing, and they will soon be even more starkly drawn: An increasingly post-Christian society will be arguing about whether or not it is acceptable to kill babies. The abortion activists say yes. We must say no as loudly as possible, and to everyone that we can.