Huge variation in abortion rates in different parts of Ireland

The new report on abortions in Ireland is very short on information, but does allow us to compare the abortion rate of different counties. The figure for the total number of terminations in Ireland last year was, of course, 6666.

Variation in abortion rates by province

Actual abortion rates here in 2019 followed the same pattern. The abortion ratios for each of the four provinces, based on the 6059 cases for which county of residence was reported, were:

Variation in abortion rates by county

Results for each of the 26 counties (for the 6059 cases where county data were provided) are presented in Table 1. Counties in this table are listed alphabetically within province. In order to facilitate the comparison of individual counties, I also sorted the data in ascending order of abortion ratio, and I then used the sorted data to generate the bar chart shown in Figure 1.

Monaghan, Roscommon, Clare, Leitrim and Donegal have the next lowest abortion ratios after Kerry, in the range 45 to 70. Neighbours Laois and Offaly come next (both low 70’s, the lowest in Leinster) and then neighbours Mayo and Sligo (75-77). Wicklow, Cavan and Longford are all close to 80.

The remaining ten counties have abortion ratios in the range 85-100. 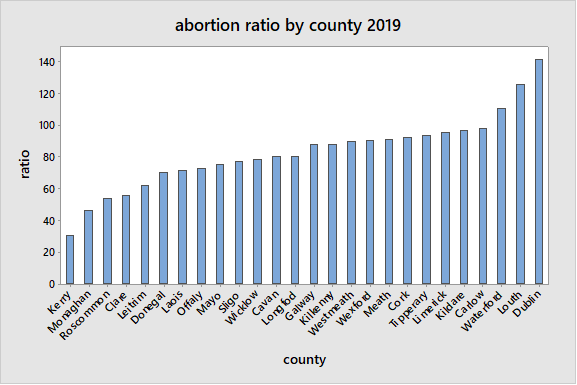 Nevertheless, there are some surprising deviations from this pattern in the Irish data. One would have expected that the counties close to Dublin, all with similar population densities, would also all have relatively high abortion ratios. While this is certainly true of Louth (125.3, second highest abortion ratio nationally), it is not at all true of Wicklow (abortion ratio of 78). Another major surprise is that counties Cork, Galway and Limerick, all with cities that are much larger than Waterford, should report abortion ratios in the range 87-96 whereas the Waterford ratio exceeds 110. Counties Cork (57 per sq km) and Waterford (59 per sq km) have very similar population densities; Galway (33 per sq km) and Limerick (47 per sq km) do have lower densities, however.

There has been some coverage in Irish mainstream media about gaps in abortion provision in parts of the country. This media coverage has focussed mostly on hospitals rather than GP’s, whereas the vast bulk of the abortions here have been carried out by GP’s. The Irish Times, however, did report on December 31st 2019 that Co Sligo still did not have any abortion-providing GP’s on that date. Of note, the abortion ratio in Sligo in 2019 was higher than neighbouring counties Mayo, Leitrim and Donegal; in fact, there are nine counties in all with lower abortion ratios than Sligo. While there are myriad factors affecting abortion rates, it does not appear from this (admittedly brief) analysis that local availability of abortion provision should be numbered among them.

The large number of cases of missing data (525) is a cause of concern. Reported abortion ratios in the above analysis would have been higher if these 525 cases were not missing. For example, the 2493 abortions listed above for Dublin represent about 41% of all the listed abortions; if 41% of the 525 missing cases were also from Dublin, then the real figure for Dublin would be 216 more abortions than listed, and in that case the true abortion ratio would be 153.2. It is entirely possible, however that these missing cases are not distributed proportionately across counties. There may e.g. be less than 216 of the missing cases from Dublin, and proportionately more missing cases in some of the rural areas. If there is indeed a pattern of residence information being more likely to be withheld in the sparsely-populated counties, then abortions and abortion ratios for these counties are under-estimated in Table 1 above, relative to the other counties, and some of my conclusions here should change accordingly. The low abortion ratio for Kerry, for example, might be due in part to Kerry having a disproportionately high share of missing cases.

One final comment. While it is clear from the data presented here that regional support for abortion in the 2018 referendum is associated with higher reported abortion rates in this study, this relationship is less uniform at the county level than the provincial level e.g. Donegal was the only constituency in Ireland with a majority No vote in the referendum, but five other counties had lower abortion ratios than Donegal in the analysis above. Nevertheless, the overall picture that emerges here is that rural Ireland has lower abortion rates than urban Ireland, just as in the referendum of 2018 rural Ireland showed lower voter support for abortion than urban Ireland.

Jim Stack MSc PhD, a retired Mathematics Lecturer, has acted as statistical adviser/author on more than forty published, peer-reviewed medical studies (listed on the website PubMed ). He writes here in a personal capacity.

The prompt and courteous assistance of the CSO is gratefully acknowledged. Their 2019 live birth data are provisional. The population density data quoted above are taken from Map 1.2 Population density region, 2016 on the CSO website.