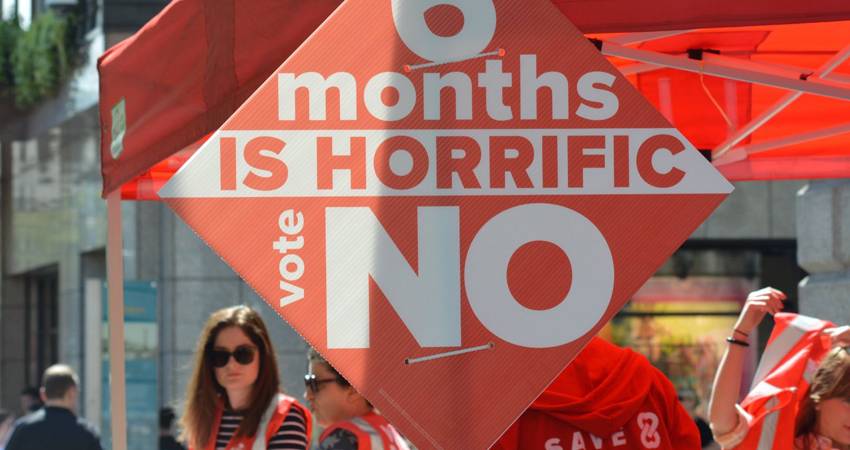 I assured wary voters that Repeal would lower the abortion rate. I was wrong.

Last week, the Department of Health published their annual report in accordance with section 20 of the Health (Regulation of Termination of Pregnancy) Act 2018 detailing the number of legal abortions carried out in Ireland in 2019. This report was especially significant as 2019 was first year post enactment of the new laws governing abortion in Ireland following the repeal of the 8th amendment. The act permits abortion up to 12 weeks on demand, with no gestational limits for abortions in the case of babies with life-limiting conditions.

The report stated that 6666 legal abortions were carried out in Ireland in 2019. The contrast in the reactions to these figures was stark. Abortion campaigners celebrated what they described as 6666 ‘little victories', while pro life campaigners grieved the loss of 6666 unique and irreplaceable human lives. The overwhelming majority (98.2%) of abortions carried out in Ireland in 2019 were elective, meaning they were carried out on healthy babies and healthy mothers. The remaining 1.8% were carried out on babies with life limiting conditions or where there was a risk to the life and health of the mother.

In addition to the 6666 lives lost in Ireland, an additional 375 Irish women obtained abortions in England, for a total of 7,041 abortions in 2019. The 375 abortions carried out in the U.K. were likely for cases which presently fall outside of the scope of Irish abortion legislation- for example, an elective second trimester abortion beyond 12 weeks and cases where the unborn baby has a non fatal, rectifiable condition such a cleft lip or club foot or a disability such as Down Syndrome.

I’m writing this article from the perspective of someone who voted Yes and campaigned for Repeal in the 2018 abortion referendum. Savita Halappanavar’s tragic death in 2012 was my first introduction to the abortion debate in Ireland. The media storm that followed put forward the narrative that Savita died as a direct result of Irelands 8th amendment and the introduction of a liberal abortion regime was necessary to save women’s lives. I bought into this rhetoric without question, believing, as did so many others, that repeal was crucial to protect women.

I became very much involved with the Repeal campaign in the years that followed Savita's death. However, my own personal experience with unplanned pregnancy showed me the truth about repeal and the beauty that comes from choosing life. I am now a mother and a committed pro life campaigner. I am actively involved with a number of voluntary initiatives and charities that include supporting women facing unplanned pregnancy and new mothers, as well as volunteering with a group that assists homeless people.

In the lead up to the 2018 referendum, the slogan ‘safe, legal, rare’ was put forward by prominent politicians including Leo Varadkar and Simon Harris, as well as amongst us Yes campaigners. “Legalising abortion will not only make it safer, but it will actually cause the abortion rate to drop!” we reassured wary ‘on the fence’ voters at the doors and on the streets. “If the amendment is approved in a referendum, abortion in Ireland will become safe, legal and rare” exclaimed Leo Varadkar in the Dáil. I am no statistician, but 1 in 10 pregnancies in Ireland ending in abortion doesn’t seem very rare.

In a speech during the referendum campaign crafted to appeal to voters who had pro-life instincts, our now Taoiseach Micheál Martin quoted research published in The Lancet & by the WHO indicating that “countries have seen a reduction in the number of abortions following liberalisation”. In fact, Ireland saw a massive surge in the number of Irish women obtaining abortions post legalisation. This trend of increasing abortion rates is not unique to Ireland. We only have to look across the pond to our UK neighbours who, in 2019, reported the highest number of abortions on record since the Abortion Act was introduced in 1967. In contrast, abortion rates are falling in the USA. A major contributing factor to this is the ever growing number of pregnancy care centres in the US who are offering real support and choice to women. In fact, these pregnancy care centres now outnumber abortion clinics in the US.

The silence from the establishment parties on the newly released figures is striking. Many people who voted yes on the basis that abortion would be legal, safe and rare are now left questioning their choice. If ‘legal, safe, rare' was a lie, in what other ways was the electorate misled? The government response to the shocking figure of 6666 unborn lives lost is non existent. They have no plans in place to address Irelands staggering spike in abortion, no solutions to help reduce or minimise the abortion rate in the coming years, no plans to fund increased supports for women experiencing unplanned pregnancy or parents in need. Similarly , the Abortion Rights Campaign (ARC) response to the doubling of our abortion rate has been most telling. Not content with the 6666 human lives lost, ARC have now focused their intention on the 375 abortions that were carried out in the UK, insisting that these abortions be catered for under Irish law. Their intention is to further expand Ireland’s abortion laws by removing gestational limits and mandatory waiting periods, the end result being abortion up to birth, for any reason and ever increasing abortion rates.

I know many Yes voters including myself are quite shocked by the 2019 abortion figures. Many of us are now reflecting on our vote through a new lens and seeing repeal for what it truly is. When we cast our ballots, did we anticipate the massive loss of life that would follow? Listening to our politicians and the pro choice narrative, we believed that legalising abortion was the kindest and most compassionate way forward for Irish women, but perhaps the loss of 6666 unborn children who will never get the chance to grow up has made us feel differently about our choice. We need to be honest when we ask ourselves, is this genuinely the best we can do for Irish women and their unborn babies or are we still failing to truly support women and protect the most vulnerable in our society?