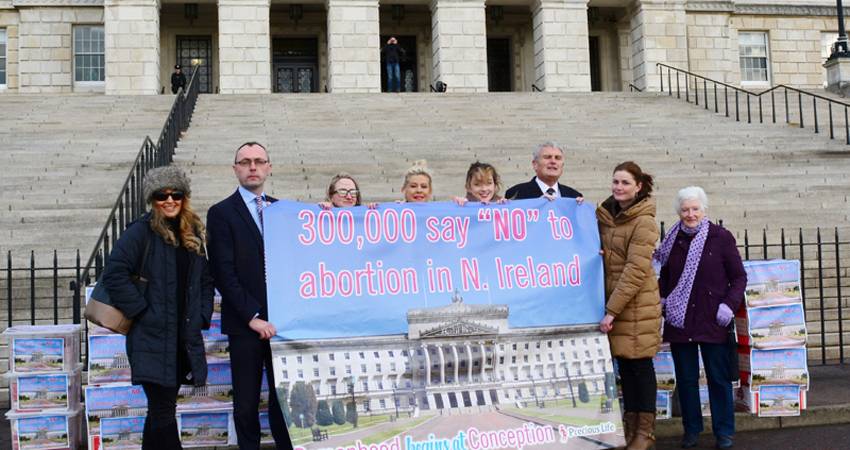 Throughout the twentieth century, much of Northern Ireland’s oppressions have been orchestrated in true colonial form from Westminster in London. But a new wave of violence has been re-established in the past months with legalized abortion being undemocratically forced on the North, as a small number of pro-abortion members of Parliament (MPs) have been striving to take advantage of Northern Ireland’s vulnerability, with its current lack of a sitting Parliament since January 2017.

Until October 2019, Northern Ireland was exempt from the United Kingdom (UK) 1967 Abortion Act, except when there was a threat to the mother’s life. There is clear evidence that 100,000 lives have been saved due to this law. The Secretary of State is obliged to introduce a regulatory framework for abortion in March 2020, so until then, abortion in Northern Ireland will be completely unregulated. Right to Life issued 18 facts about the new law, including that it allows abortion up to 28 weeks for any reason, such as sex selection and disability, and that no parental consent is needed for girls under 15.

Various British MPs have flown in and out of the North to speak to abortion advocates such as Amnesty UK but have arrogantly chosen to ignore the pro-life stronghold there. In the 2011 Census, 82.3% of Northern Irish residents described themselves as Christian, compared with 59.4% in England. However, just as the Republic of Ireland’s Catholicism and unique culture was oppressed for many years while under British rule, this is now occurring in Northern Ireland, with British MPs ignoring the North’s strong religious backdrop and voting against the will of the Northern Irish population.

In its push for abortion in NI, Amnesty UK has been using gimmicks for a law change such as sending a letter signed by UK “celebrities” to then-Prime Minister, Theresa May in 2018, with just two out of the 67 signees actually coming from the North. An Amnesty survey in October 2018 claimed that 75% of the UK public wants the law changed, despite the fact that Northern Irish citizens were asked different questions from the rest of the UK. Amnesty made the (unlikely) claim that 66% of NI residents stated that in the absence of a devolved government, Westminster should reform the law. The Amnesty results are in sharp contrast to a ComRes survey also conducted in October 2018 that stated that 64% of Northern Irish residents were opposed to Westminster imposing an abortion law on them.

Over the past year, the colonial attitude towards Northern Ireland also became more apparent in pro-abortion MPs such as Diana Johnson and Stella Creasy forcing abortion on the North. When Diana Johnson’s Ten Minute Rule Bill for abortion ran out of time in October 2018 (despite being passed by 208 to 123 votes), in June 2019, London MP Creasy enlisted the help of pro-abortion House of Commons speaker, John Bercow to give her the time to tag on the decriminalization of abortion in the North to a completely unrelated bill, which was passed by 332 to 99 votes. It was voted against by all Northern Irish MPs who were present in Westminster and no voting opportunity was given to Northern Irish citizens. As independent crossbench peer Lord Alton stated, 100% of those who voted for abortion in the North were from constituencies outside that region, while 100% of those who voted against it were from the North.

Creasy then claimed that Northern Ireland should not be consulted on their own new abortion law, demonstrating a patronizingly colonial attitude towards the North. She was not remotely interested in the thousands of Northern Irish who gathered outside the Northern Irish parliament in Stormont for NI Voiceless, who marched in the Rally for Life in Belfast in September, and the more than 47,000 people who signed Baroness O’Loan’s petition opposing the new abortion law. Nor was she concerned about the medical professionals who do not want to be forced into participating in abortion, as per the new law.

Sinn Féin’s use of abstentionism means they refuse to take their Westminster seats, because they do not recognize the UK Parliament’s right to legislate for any part of Ireland, as embarrassingly demonstrated by Sinn Féin leader, Mary Lou McDonald’s England Get Out of Ireland poster in New York on St. Patrick’s Day 2019 (pictured). However, when it comes to abortion, in true colonial style, Sinn Féin is happy for the British to take over and make the decisions for them.

Councillor Dr. Anne McCloskey, of the new pro-life republican political party Aontú, stated: “[Irish Republicans] looked on in disbelief and anger as our supposedly Republican representatives [that is, Sinn Féin] traveled cap in hand to Westminster to ask them to legislate in our country. To beg English MPs to impose their laws on our land.”.

Niamh Uí Bhriain has noted that Sinn Féin is happy to surrender Irish sovereignty when it comes to abortion. The pro-life group Precious Life has since protested both Sinn Féin and the SDLP due to these political parties’ betrayal of preborn children: both parties refused to take their seats in Stormont on October 21st, when the final attempt was made to prevent this law from coming into force.

However, the real reason that Creasy and her colleagues are interested in Northern Ireland is that abortion advocates have been trying for years to decriminalize abortion in the UK, which will remove all legal safeguards and make women even more vulnerable than the current law. The British Pregnancy Advisory Service (BPAS) has launched a campaign called We Trust Women to push for this change in law, which would allow for the possibility of abortion to birth for any reason.

BPAS CEO Ann Furedi praised Andrew Cuomo’s horrific New York State abortion bill in January and has openly admitted that this is essentially what she wants in the UK. Such a law must apply to all of the UK so potentially, abortion in the UK will be completely free from restrictions next year.

And predictably, in an attempt to win votes in the UK election on December 12, the Liberal Democrats had announced that if elected, they planned to decriminalize UK abortion for any reason to 24 weeks, and the Labour Party had planned to make it legal to birth for any reason. However, neither party was elected.

Just as in the United States, now that the true agenda is out in the open for all to see, it may have encouraged British voters to re-think the real agenda of the abortion industry, which clearly cares little for women and their children.

This article has been printed with permission