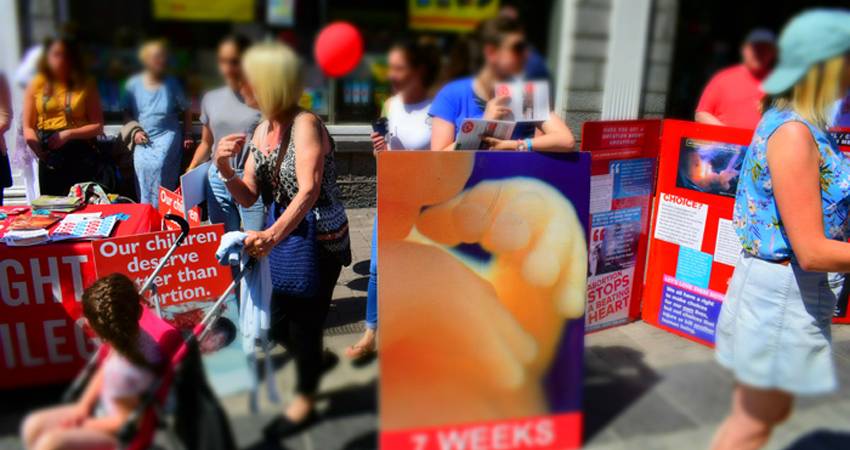 My name is Christina and I am against abortion

I first came across with Youth Defence on my second day in Ireland. It was the day after St. Patrick´s Day. I came to live in Dublin as an Au pair with a family very similar to me. I saw the stall they usually display on O'Connell Street and some girl (Karen) gave me a leaflet about abortion and asked me if I wanted to sign a petition against abortion coming to Ireland. I wasn’t sure if I could because I was foreign but as I knew the family was pro-life, so I dared to sign it anyway.

I told Karen that I was from Spain and then she introduced me to another Spanish girl, that was studying in Ireland too and was volunteering with them. This Spanish girl told me that wasn't interested in having any Spanish friends because she wanted to improve her English, but she said that I was very welcome to join Youth Defence. After a while, we became best friends and her English wasn’t that bad at the end! I got involved in Youth Defence without even noticing. For me was something very interesting to do.

It was doing something good, meeting Irish people in a different way, so I went to my first street session. I wasn't completely pro life. I still had serious doubts about the cases in where a woman has been raped or in cases of foetal abnormalities; I agreed with what what I heard on TV. But I knew I would never have an abortion and I thought abortion on demand was wrong, so I joined them. My first impressions were bittersweet. I remember thinking to myself: “What am I doing there? It isn’t even my country! I 'm not fluent in English! Am I just doing it for making Irish friends?” Then I saw the boards they display on the street. In a few of them I saw very shocking pictures of aborted babies. The one that caught my attention the most was a little arm, not even the size of a euro coin, ripped off the baby’s body. It made me feel terrible.

I had doubts again. I hated those pictures. After few more street sessions, I felt a bit more confident. I read all the leaflets they gave, but as my English wasn’t great I only got bits and pieces of what I was reading. I decided not to look at the things that disgusted me more: the pictures. One day I thought very seriously about quitting. If I was so disgusted by those pictures why was I helping the people showing them? And right there my conscience struck me. What I was doing wasn't wrong. Abortion was wrong. Those pictures are terrible, not the people showing them! Ripping babies apart, killing beating hearts, was the reality of abortion. What was wrong was supporting it in any case. There were no “But" and "ifs” left in my thoughts. Of course, I kept thinking about the horrible situations in which those women have to go through. But I could not ignore anymore that those pictures showed mutilated babies. That wasn’t fair, even if they had abnormalities, or whatever pain the mother had suffered. Instead of killing them we should be giving those mothers help!

After that turning-point, I read a lot more about those cases, and I found loads of information in other leaflets that Youth Defence were giving on the streets. At the beginning, I was too embarrassed to ask anyone else in Youth Defence, but every time I asked a question, instead of impatience or shrugging me off I had amazing discussions. After all, they are young people just like me, living the same situations and coming across all these questions themselves. Today, four years later, I come back every time I can to Ireland, to help Youth Defence the best way I can. I spend as many Saturday mornings as I can in O'Connell Street doing the street sessions handing out leaflets and, why not? Having chats with people that have the same doubts that I had.

This year I was on my first Roadshow and I have to say it is tough to be out there trying to defend the most vulnerable creature on Earth because all the hate the media spread about us (pro-life people). We get insulted, yelled at, and I’ve been told to “go back to my country” about 5 times during the roadshow (Never, after all the years coming to Ireland an Irish person was that rude to me). But when I look at those pictures on the boards now, I repeat to myself, that it’s all for them. For those babies killed without hesitation, for those mothers who are told that abortion is the only option. So when people yell at me and get disgusted by those pictures now, it brings me memories. I totally see how they feel! But that is abortion.

We cannot turn the blind eye to it. If it sticks in our brain when we see a picture of a mutilated baby, it is because IT IS WRONG. Because ABORTION IS WRONG.