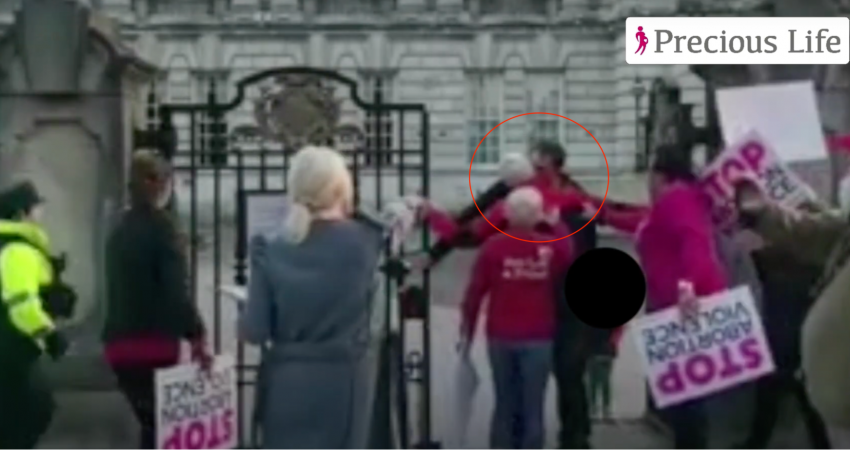 On Saturday, November 5th, pro-life supporters gathered at Belfast City Hall to stand with Precious Life to mark the 3rd anniversary of abortion on demand in the North of Ireland, and to commemorate the resulting deaths of 4,136 innocent babies.

In a video linked below, Precious Life director Bernie Smyth can be seen beginning her speech at the event. Shortly after she starts, the anti-social behaviour begins.

A man can be seen approaching in the back, with his two young children. He begins to point at Bernie, directing his children’s attention to her, and then twirling his finger at his head. The man repeated this behaviour numerous times, seemingly trying very hard to communicate a certain message about the Precious Life director to his young children.

After approximately 4 minutes of this disruptive behaviour, which all of the attendees were forced to notice and be distracted by, as he and his children were positioned behind her, a female pro-life steward approached the man, asking him to stop. The man proceeded to try and slap the “Stop Abortion Violence” poster out of her hands, and began loudly and aggressively shouting at her, “Get out of my face!”.

He continued this aggressive behaviour when a male pro-life steward came to the aid of the woman. .

The victim of the attack can be seen recoiling in shock and pain - and he required hospital treatment.

The attacker can be seen in the back, seemingly handcuffed by police.

The pro-life gathering continued, as Bernie Smyth pushed through in order to draw attention to the evil of abortion. Pro-life activists like Bernie and the Precious Life supporters in attendance are all too familiar with aggressive behaviour from abortion supporters.

Nevertheless, the men, women and children gathering to commemorate the innocent 4,136 babies killed by abortion were understandably appalled and frightened at the scene they had just witnessed. An apt quote from Saint Mother Teresa comes to mind:

“Any country that accepts abortion is not teaching its people to love, but to use violence to get what they want.”