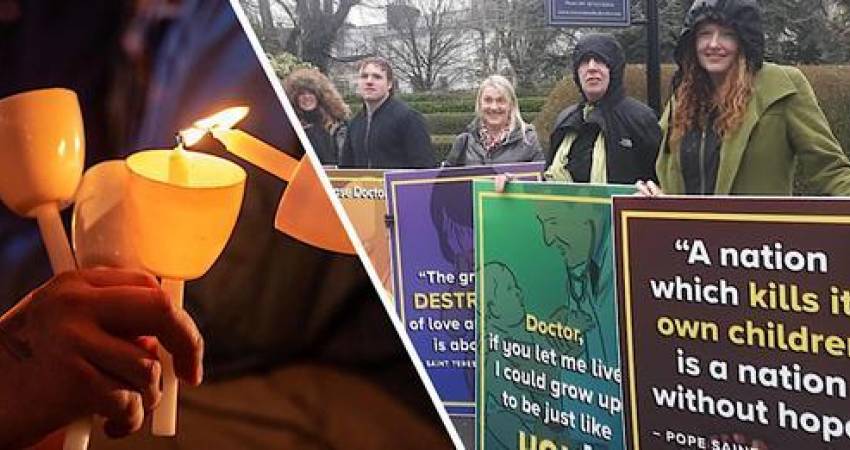 ‘We haven’t changed our minds about offering compassion’: Pro-lifers defiant in face of exclusion zones threat

Irish pro-life advocates are remaining defiant in the face of threats to impose exclusion zones to ban prayer and peaceful protest outside of abortion centres.

In August, the government proposed legislation which would introduce censorship zones within 100 metres of buildings where abortions can be performed. Last Wednesday, the Oireachtas health committee discussed the Bill during a pre-legislative scrutiny session.

The legislation would mean actions deemed to influence a person’s decision in relation to abortion would become illegal outside hospitals, community care centres, and other premises across the country, including GP practises.

The controversial legislation could criminalise prayer, along with the distribution of pro-life literature, imposing fines of up to €2,500 and a six-month jail term.

Minister for Health Stephen Donnelly pushed for quick progress on the proposals, which have not yet been debated.

Pro-life campaigners have highlighted the fact that in a scenario where harassment occurred outside such premises, the Gardai already have sufficient powers to act.

Gript spoke to pro-life campaigners who take part in regular prayer and outreach at abortion centres, as pre-legislative scrutiny of the ‘safe access’ zones legislation got underway on Wednesday.

Exclusion zones rendering pro-lifers’ attempts to save lives at abortion centres will become illegal when the zones of 100 metres are applied to healthcare providers, covering all facilities that could offer abortions, even if they are not currently doing so, the committee heard.

In Ireland, abortions are carried out at 11 maternity units while medical abortions take place at one third of GP practises.

A Gript investigation in May revealed that the campaign group ‘Together for Safety’ lied openly about the purpose and timing of prayer vigils outside University Hospital Limerick.

In May of this year, the abortion advocacy group claimed that “pro-life” campaigners had been “leaked” the time and dates of abortions taking place in the hospital so they could intimidate women seeking abortions. The ultimate motive behind the false accusations was a push for laws to be brought in that would criminalise any display that could be deemed anti-abortion near any facility carrying out abortions.

As John McGuirk highlighted in May 2022, the claim they made gained huge traction. The Irish Independent “amplified it to the nation”, while politicians in the Oireachtas also used the story to push for exclusion zones. The claims, later proven to be untrue, were stated as fact, and used as evidence of the urgent need for new laws.

Gary Kavanagh comprehensively proved the claim as false. It was the third major claim from Together for Safety that Gript has shown to be untrue. It followed Gript’s unravelling of Together for Safety’s previous claim, in February 2021, that pro-life protestors tried to gain access to a family planning clinic in Limerick. Staff at the facility, when contacted by Gript, denied them and said it was untrue, even though it was originally reported by The Limerick Post.

And in January 2022, a Gript investigation also tore apart claims that pro-life protestors had been harassing and intimidating women. After contacting every hospital providing maternity services across Ireland, we found that from the 16 out of the 19 relevant hospitals who responded, none had ever received a single complaint regarding the protests, either from staff or patients. Moreover, none of the hospitals detailed a single incident where pro-lifers had tried to intimidate or harass patients.

Despite this, speaking on Wednesday, Department of Health assistant secretary Muiris O’Connor said that the protests are a source of harm and distress.

“We are very conscious too of the chilling effect,” Mr O’Connor said, adding that:

“The actual protests cause harm and distress but fear of protests is constraining the rollout [of services]”.

He added that the right to ‘protection’ must be balanced against the right to legitimate protest. Critics have condemned the concept of ‘safe access zones’, with commentators describing the zones as a threat to free speech and freedom of assembly.

Writing for The Times in July 2022, David Quinn, director of the Iona Institute, said that the zones are a danger to free speech.

He pointed out that so few other European countries have imposed exclusion zones, owing to the fact they “still believe in the right to protest and the principle of proportionality.”

“Our health minister doesn’t seem to care so much about such considerations. He seems more interested in pandering to campaigning NGOs than in objectively assessing the need for a law he hopes to see passed before the end of the year,” Mr Quinn said in his piece for the British paper.

Despite the clear vilification of pro-life advocates, evidenced by dialogue in the Dail and the Oireachtas, and the presentation of such people in the media, they are remaining defiant and determined in the face of the threats to stop their witness.

Speaking to Gript, one member of the Limerick prayer group who pray outside the hospital on a regular basis, insisted: “We haven’t changed our minds about offering care and compassion”.

“I think it is important to keep praying for both the safety of the unborn children and their mothers. We pray for both and the healthcare workers involved, who have to carry out this horrendous life ending abortion procedures.

As noted, most doctors and nurses don’t want to be involved in the abortion business, it takes lives and hurts women,” the pro-life advocate, who has been involved in peaceful witnesses outside Limerick Hospital since 2018 said.

He described accusations against pro-lifers as nothing more than “make e uppy stories” by the abortion lobby, adding:

“No evidence has been recorded in the media, who would be quick to publish anything , if there was factual evidence.

“We were pro-life before the referendum, during the referendum, and now after. We haven’t changed our minds about offering care and compassion for all those involved and our prayers.

“Many of those who pray also are involved in support services such as Gianna Care and others, and contribute financially to help fund these services.

“We believe in the power of the Holy Rosary to change hearts and minds, we pray quietly or silently and reflectively calling on Our Lady to intercede for this cause, to protect all.

“We might not see the results of our prayers, but according to some who have worked in abortion clinics, days when there is prayer witnessing, many women change their minds. Healthcare workers involved have also changed and stopped,” he added.

Pointing to the example of Abby Johnson, a Planned Parenthood Director who left her job and converted to work in the pro-life movement after encountering 40 Days for Life, a US prayer initiative who would routinely protest outside her clinic, he said:

“Abby Johnson and her conversion story in the USA is a clear example of the results of the power of prayer. We can learn a lot from the USA , about trying to cover all aspects of life issues”.

He added that attempts to stop peaceful prayer is indicative that such action “is working” and that abortion advocates know that prayers such as the Rosary are “powerful”.

“[Abortion advocates] including the media want the whole horrendous abortion business hidden from the public, and kept quiet, now that it has been introduced.

“It is up to the pro-life community to keep this issue ‘alive’ and the unborn babies alive by active participation in pro-life witnessing, prayers, life giving care and compassion, political activism and financially supporting pro-life organisations”.