Beautiful testimonies and stories of premature babies who survived against the odds!

When Agnes Poppy Taylor-Hatt turns one next month, her parents plan to throw her a heroes party. ‘I call her my little hero,’ Agnes’ mother Jacinta told Daily Mail Australia. She was born at 27 weeks gestation.

‘She’s so brave and really fought, she fought to be here from that being so tiny, little and fragile.’

Tiny Macey Micklethwaite was barely the size of his hand when she was born weighing just 1.2lb. She arrived at 25 weeks - just seven days over the cut off point for abortion in the UK

THESE ‘miracle’ twins born within the UK’s legal abortion limit are set to celebrate their first birthdays, despite being deemed too young to survive.

Cadence Moore weighed just 1lb 1oz when she was born, less than a bag of flour – and her brother Jaxson 1lb 6oz.

Meabh McArdle was just over 1lb when she was born on October 9 last year at 23 weeks and three days - and doctors feared the worst.

When Sadie Cratchley went into labour four months before her due date, doctors warned her to assume the worst. With just a one per cent chance of surviving labour, specialists told the mother-to-be to 'let her go'.

But the 20-year-old refused to give up on her unborn daughter. Tiny Kaci-Rose Cratchley was born at 23 weeks and weighed just 1lb 2oz - half the weight of a bag of sugar.

Chase and Cooper, little twin boys, didn't survive but their photos taken after birth show the humanity of the unborn child at 22 weeks.

The tiny baby saved by his mother's love: Mhairi and Paul Morris were told to abort her 'non-viable' son after her waters broke at just 20 weeks. They ignored their request and now their son has just passed his 1st birthday!

Tiny twin babies born just a week before the legal abortion limit have made a full recovery, despite doctors warning their parents to expect the worst. Nichola Baird, 30, from Hebburn in Tyne and Wear, gave birth to twin boys Kyle and Jake last September.The boys arrived just 23 weeks into the pregnancy, and were barely the size of a hand. The current legal limit in the UK for an abortion is 24 weeks with research showing babies born before this time rarely survive.

A mother has released the first photograph of the moment her premature daughter was born, hours before she passed away too small to survive. Emily Caines and her husband Alastair want to raise awareness of the issues surrounding neonatal death, after losing tiny Adelaide when she was just hours old.

Mrs Caines, 35, from Yeovil in Somerset, said: ‘Our picture shows Adelaide was not a foetus, she was a fully formed human being and to think that a baby like her could be legally terminated is to me horrifying. ‘Our hospital was amazing and did all they could but Adelaide suffered complications which made it impossible for her to survive but many babies born at 24 weeks do live.

In mid 2014, little Declan is fighting for his life after weighing in at just 14 ounces and measuring only 10 inches. He was born at 22 weeks in Napa Valley, California.

Little Chanel Murrish is Britain’s youngest ever baby to have open heart surgery – just minutes after being born. Her chances of survival had been so low before her birth that her parents Fay and Micheal were twice offered a termination. But the couple refused to give up on their daughter after a scan during Fay’s pregnancy showed the tiny fighter giving the thumbs-up.

Reaching out a tiny hand, Emily Cressey clasps her mother’s little finger for the first time. The infant – born at 24 weeks – is believed to be the country’s youngest surviving birth. Her mother, Claire, 34, said being able to hold for daughter for the first time on Mother’s Day was ‘the best moment of my life’. Emily weighed 535g (1lb 3oz) when she was born on February 27 and could legally have been aborted.

A premature baby born at Derriford Hospital in Plymouth weighing just 1lb has defied the odds to reach her first birthday - despite being so small she was kept alive in a sandwich bag. Miracle tot Lucia Sansbury weighed less than half a bag of sugar when she was born more than three months early. The tiny infant needed emergency treatment to repair her bowel and laser surgery to save her eye sight.

Isabella was born on October 3, 2013, weighing just 1 pound, 2 ounces, barely bigger than her mother's hand. Her, tiny, underdeveloped lungs fought to keep her alive. Doctors warned her parents that her chances of surviving were bleak. She was born at only 22 weeks and is the youngest baby at Kaiser Permanente Hospital in San Diego to survive.

On September 1st, 2011 our son Ezekiel Cal Lugo was born 4 months too early. He was born at 25 weeks weighing 1 lb 2 oz. Doctors didn't expect him to live. If he did live, we were told he would have multiple health issues. Ezekiel aka "Zeke" survived and he's very healthy! God had different plans for our little guy! We are sharing this video to show that to inspire and give hope to anyone thats needs a miracle.

When Rachel Collins was told that her waters had broken at 20 weeks Sutton Coldfield's Good Hope Hospital informed the mother-to-be that her 'best option' was to terminate the pregnancy as the baby's chance of survival was less than 10 per cent.

This is a story of a mother's love for her baby. It sums up my son's first year. He was born way too early, 3.5 months early, and the obstacles he had to overcome were really big, but not bigger than our God. I want to thank all the doctors, nurses, and staff all over the world that make it their life's mission to help babies get better! It's because of you that my son ever stood a chance to make it home!

Little Frieda was born on November 7, 2010, at Fulda Children's Hospital in Germany. She weighed just 1lb and measured 11 inches. A record-breaking baby girl, she was born at just 21 weeks and five days but spent Easter at home with her delighted parents after spending five months in neonatal care.

Little Frieda was born on November 7, 2010, at Fulda Children's Hospital in Germany. She weighed just 1lb and measured 11 inches. A record-breaking baby girl, she was born at just 21 weeks and five days but spent Easter at home with her delighted parents after spending five months in neonatal care.

A “MIRACLE” baby, born at just 24 weeks and weighing less than a bag of flour is now thriving, according to his proud parents. Little Aiden McLaughlin spent almost a year in hospital but has now caught up with his peers and has started to walk and talk.

When Aaliyah Hart was born in 2003 at City Hospital, Birmingham, three months prematurely, weighing just 12oz and only 7 inches long, and with undeveloped lungs, doctors told her mother that she had a 1% chance of survival.

And this is Aaliyah 10 years later! Bravo!

A woman who suffered six miscarriages in 14 years has spoken of her joy of finally becoming a mother. Kim Cruickshanks, 32, gave birth to Daisy four months early and was warned the baby would not survive. After the agony of losing six unborn children she could not bear to look at her first-born child when she arrived at just 23 weeks, weighing 1lb 1oz.

ESME Poulsom is a baby who refused to give up on life – just as her parents refused to give up on her. After mum Kirsty Bassett’s waters broke last November at just 19 weeks pregnant, Esme was given no prospect of survival by one Gwent hospital. Before she was even born Miss Bassett, 24, and Esme’s dad Gareth Poulsom, 27, were planning her funeral. What followed is a testament to her instinct for survival, and their dedication.

Born in April 2013, His hand was so tiny that he could barely hold his mother’s little finger. Yet somehow premature baby Lucas Georgiou, pictured here at one week old in intensive care, clung to life. He had been born at 23 weeks and weighed just 1lb 8oz. Doctors gave him only a one in four chance of survival.

On August 2 2000 Lauren was born 14 weeks early, at 24 weeks gestation weighing only 1 pound and 8 ounces and only 14 inches long. Her mother's amniotic sac ruptured and there was no time to delay. The big moment came; her eyes were open and she did cry, she was so tiny. Doctors examined her before they took her away to the neonatal intensive care unit.

The record for the smallest premature baby to survive is Rumaisa Rahman, who was born in September 2004 at 25 weeks gestation. At birth she was eight inches (20 cm) long and weighed 244 grams (8.6 ounces). Her twin sister was also a small baby, weighing 563 grams (1 pound 4 ounces) at birth. During pregnancy their mother had suffered from pre-eclampsia, which causes dangerously high blood pressure putting the baby into distress and leading to birth by caesarean section.

The larger twin left the hospital at the end of December, while the smaller remained there until 10 February 2005 by which time her weight had increased to 1.18 kg (2 pounds 10 ounces).[37] Generally healthy, the twins had to undergo laser eye surgery to correct visual problems, a common occurrence among premature babies. 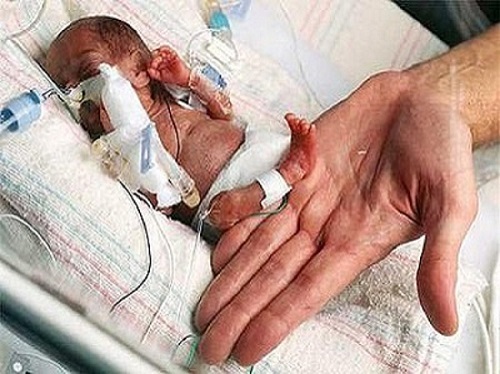 This is Kelly Thorman - 3 weeks after birth. Born 30/1/71. She surprised her mother by being born very prematurely - at 21 weeks gestation - just a little over 4 1/2 months of pregnancy.