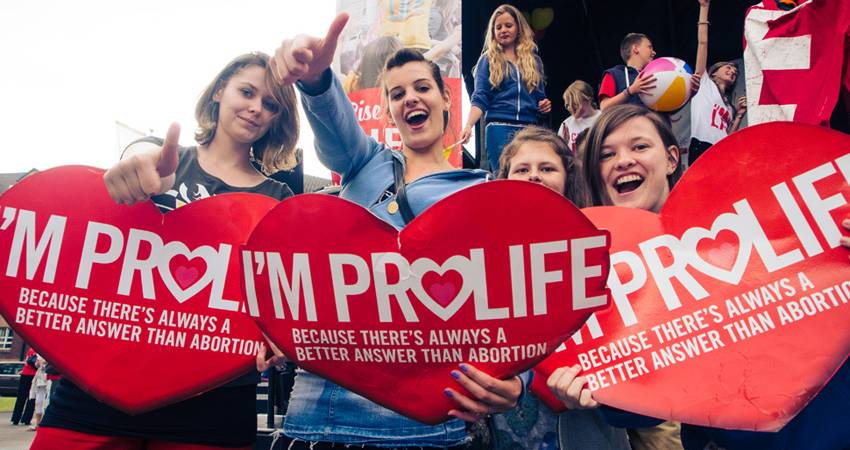 The pro-life and proud generation stands out at Rally

Last weekend I headed to the All Ireland Rally for Life took place in Belfast this year. It’s a wonderfully upbeat affair, a real celebration of Life, and a riot of colour with masses of banners, balloons, kids in t-shirts, music and a general air of festivity.

It was a great day: after 7 years it’s pretty much become the premier pro-life Irish event and the attendance continues to grow.

This year was the biggest crowd yet in Belfast, while last July a record-breaking 60,000 people marched in Dublin where the Rally is held every second year, making it not just the biggest pro-life event ever held in Ireland, but also one of the largest public marches ever held on any issue in this country.

What was really striking at the Dublin rally last year was also a stand out feature of the march in Belfast last week: the increasingly young profile of the marchers and the sheer energy they bring to the cause.

This is the pro-life and proud generation. They wear their hearts, not just on their sleeves, but emblazoned on their t-shirts.

They are unapologetic about their pro-life stance, unreserved about making the reality of abortion known, and uninhibited in sharing the message that there is always a better answer for mothers and babies.

Their energy is palpable and hugely encouraging. I watched one crew call out chants as the crowd responded in the bright sunshine. It was infectious:

“One, we are pro life
Two, a little bit louder
Three, I still can’t hear you
Four, more more more”

“Extra, extra, read all about it. We’re pro-life and we’re going to shout it.”

My kids were still rhyming them, not just on the way home, but the next day too.

These are the kind of slogans that lodge in the brain and get stuck on repeat. It’s indicative perhaps of what being pro-life means to this generation, who see abortion as the ultimate human rights abuse, and who want to be part of ending it.

It’s the automatic choice, the default position for a generation who’ve grown up with an enhanced understanding of the humanity of the unborn child, and the terrible reality of abortion.

There’s isn’t a political party in the country who can raise this kind of youthful enthusiasm or motivate these kinds of crowds. And at the Rally, the contrast between the pro-life participants and the pro-abortion protestors and the couldn’t have been more stark. It was the difference between darkness and light.

The tiny group of abortion supporters were sullen and angry, and their aggression and abusiveness prompted several warnings from the police about their behaviour. Whatever spin they try to put on it, theirs is a grim and bleak cause, offering none of the hope, none of the compassion that the pro-life movement seeks to bring to mothers in crisis. No wonder more and more young people are choosing the pro-life side.

It’s a global phenomenon: young leaders have risen up right across the globe, emboldening the movement, and signifying, perhaps almost more than any other development, that legal abortion can be ended in my lifetime. Even abortion campaigners, in the US for example, have acknowledged that young people are not just increasingly pro-life but that the ‘voter intensity’ is remarkable with one survey finding that 51 percent of pro-life voters age 30 or younger feel abortion is a very important issue for them at the polls, while only 26 percent of ‘pro-choice’ voters felt so intensely.

That’s not for a moment to take away from the amazing families and elderly folk who’ve kept the light of life alive in this country and elsewhere for decades – and who stand shoulder to shoulder with this new generation in support of life and against abortion.

All credit too, to Youth Defence and Precious Life for overcoming so many obstacles to reach out and raise up a new generation who believe that abortion is never the answer.

Rather than resting in their laurels after such a great event last weekend, a whole team of these young activists have now set out on a National Roadshow to ‘change hearts and minds and bring Ireland back to Life’. Their commitment matches their energy: their pro-life beliefs are carried beyond rallies and celebrations and channelled into a lasting and powerful force for good.

Their message will not be ignored. This generation has arisen for Life. They are pro-life and proud, and they will end abortion.