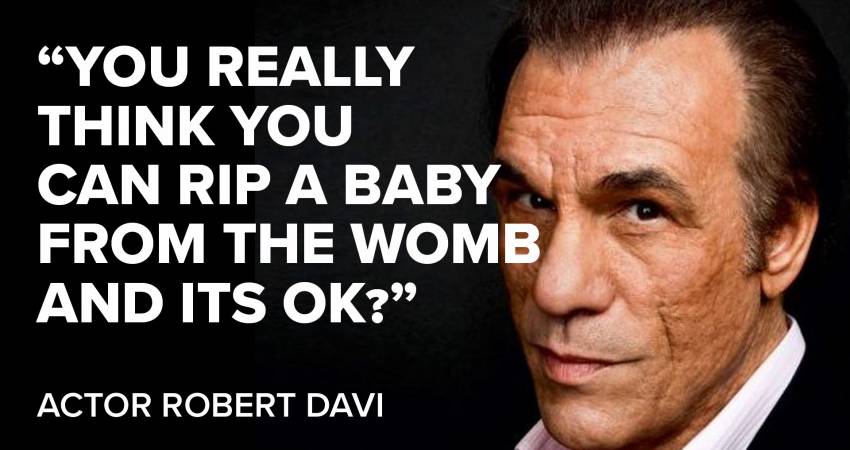 Robert Davi and the celebration of abortion

Like most people, I only know actor Robert Davi from big box-office hit movies such as James Bond, Die Hard, and the Goonies. I had never known him to take a stand on abortion, or comment on the issue at all, until last week when he posted a powerful two-minute video on Twitter after New York State legalised abortion until birth.

The genuine sadness and upset Davi felt was evident throughout his message.

“My dear brothers and sisters,” he began. “ .. I cannot tell you how disturbed I am to hear that  in New York State they passed the bill whereby you can abort babies up to nine months ... I don't understand what's happening to this country.”

He was right to grieve. What happened in New York was particularly shocking and appalling. Abortion supporters, worried that the Supreme Court might swing pro-life under Donald Trump and overturn Roe vs Wade,  passed what they boasted was the most “aggressive” abortion law in the country, allowing abortion in many cases up until the day the baby is born.

New York already has a horrifying abortion rate: in New York city one in every three babies are aborted.  Now this law seeks to make that horrendous situation even worse.

The late-term abortions the State Senate approved will involve almost unimaginable cruelty. As I previously described, the preborn baby will be injected with potassium chloride, a solution so toxic, capable of inducing a death so painful and violent, that prisoners on death row are first given an anaesthetic and a paralytic before it is administered. There will be no pain relief given to preborn babies however.

The law was described as “evil codified”  by Neal Larson of the Associated Press. It’s hard to argue with that summation.

Governor Andrew Cuomo, supposedly a Catholic, didn’t just sign the law, he threw kisses to the crowd while he was doing it, and ordered the World Trade Center to be illuminated in pink to celebrate the moment.

Celebrating abortion seemed to be the order of the day. A video posted of the New York Senate  showed abortion supporters and politicians whooping, applauding and cheering when the law was passed.

It reminded me of the frankly disgusting scenes in Dublin Castle last May, when a grinning Taoiseach and Minister for Health cheered on a mob who were gloating, shouting and dancing the conga to celebrate legalising abortion.

Abortion campaigners used to pretend they wanted abortion to be “safe, legal and rare”, and they used that language to sell it as a necessary procedure for difficult cases.

Now, it seems, abortion is a reason to party.

However, just as the antics of the Dublin Castle mob horrified many soft Yes voters in Ireland, the raucous celebration of late-term abortion in New York also caused palpable unease across social media in the United States.

Professor Robert P. George echoed the feelings of tens of thousands of people posting on Facebook and Twitter when he said the “sheer inhumanity ... literally nauseated” him.

Then there were posts like this one which underscored the horror of it all.

“Where is the uproar?” asked Robert Davi, as he mourned what New York had done. The answer might be in how many people shared his sadness in seeing their fellow Americans cheering and stamping in support of late-term abortion.

It would make you weep for humanity, except that when people raucously celebrate killing preborn babies in the third trimester it is difficult to imagine what scrap of genuine humanity remains in their hollowed-out souls.

However, a week after the scenes in New York, the Virginia House also debated a bill to allow abortion to the point of birth. The bill was voted down, but Ralph Northam, the Democrat Governor, caused widespread uproar and anger when he defended the bill's provisions, in particular when he argued that if a baby was born after a failed abortion "the infant would be resuscitated if that’s what the mother and the family desired, and then a discussion would ensue between the physicians and the mother".

Abortion campaigners forget that the middle-ground voter doesn’t believe in “shouting your abortion" or in celebrating it as a moral good. The support of those voters has only been gained by selling the false pretext that abortion is a sad but necessary evil.

The depraved scenes in New York and Dublin have shown the real mindset of abortion campaigners and their horrifying indifference to the child about to be killed. In letting the mask slip they have revealed themselves to the middle ground in a way that will yet lose them the war.