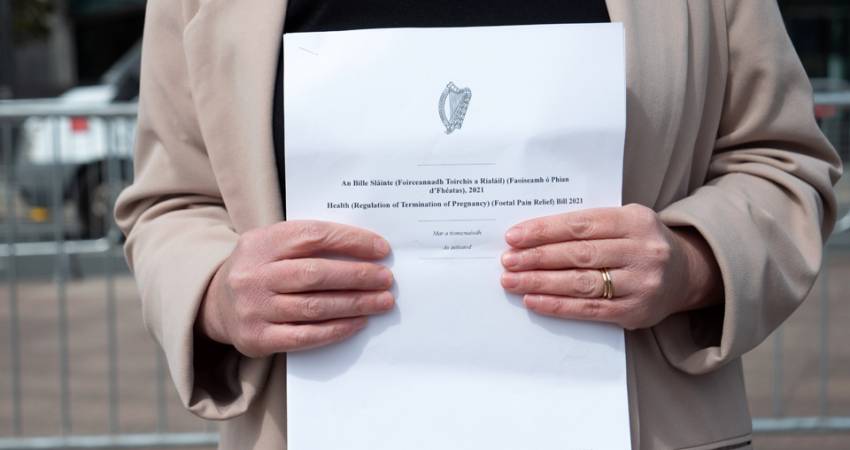 Some things in life are self-evident and should be apparent to everyone. Doing everything we possibly can to prevent a baby feeling pain - especially agonising pain -  is surely one of those things.

No serious person denies that an unborn child at 20 or 30 weeks gestation is a human being. And most thinking people are somewhat aware that modern medicine has long since established that pain can be felt by the child in the womb, especially further along in the pregnancy.

The reality is that the late-term abortion method being practised in Ireland must cause the baby pain.

Potassium chloride is injected into the baby's heart in a procedure known as feticide. We know that this is taking place in Ireland because the doctors who perform these abortions discussed this in a paper published in the British Journal of Obstetrics and Gynaecology by researchers from UCC. In the paper, one doctor described it as 'like stabbing the baby in the heart'. Another described getting sick out in the corridor after performing the procedure.

We also know that the guidelines issued by Institute of Obstetricians and Gynaecologists in Ireland (January 2020) make no mention of a requirement to administer pain relief to the baby in advance of a late-term abortion. And we know that Simon Harris, then Minister for Health, snidely refused all amendments to the Abortion Bill, including one which would have required pain relief to be administered.

This week, Carol Nolan TD, told the Dáil that "medical science has known for some time that unborn babies can experience pain from 20 weeks gestation. However, an increasing body of scientific research from about 2007 onwards has suggested that the brain and nervous system develop at a rate which means that unborn babies may feel pain as early as 13 weeks. The latest such study was published just last year in the Journal of Medical Ethics," she said.

"A recent comprehensive review of the scientific literature by two experts – one of whom is pro choice – concluded that unborn babies may experience pain as early as 12 weeks, and that there was certainly no way to definitively exclude that possibility," Deputy Nolan said.

That review makes for sombre reading - and it addresses late-term abortion.

It notes that a previous consensus of sorts which stated that pain was only possible after 24 weeks relied on observations regarding the development of the cortex – the brain layer that processes sensory information – in the unborn baby's brain. However, the authors reveal, recent studies, including one which showed an adult with a severely damaged cortex could still feel pain, indicated that consensus was now upended.

They explained that after 12 weeks gestation, the preborn baby has developed a subplate – a temporary structure which carries connections from the thalamus – and that it is believed that this may be a means of experiencing pain as the baby develops.

“[C]urrent neuroscientific evidence undermines the necessity of the cortex for pain experience. Even if the cortex is deemed necessary for pain experience, there is now good evidence that thalamic projections into the subplate, which emerge around 12 weeks’ gestation, are functional and equivalent to thalamocortical projections that emerge around 24 weeks’ gestation,” the paper said.

To carry on with late-term abortion without pain relief regardless of the new evidence ‘flirts with moral recklessness’, the experts argued.

This is the latest scientific evidence regarding the ability of an unborn baby to feel pain and brings us to a very clear conclusion: performing a late-term abortion without pain relief is deeply immoral.

One other piece of information is pertinent. Potassium chloride is used in another setting, one equally controversial. It is injected into prisoners undergoing the death penalty. As researcher Ruth Foley previously observed, in the USA the use of potassium chloride to end a life is considered so painful that the authorities in charge of USA executions consider it necessary to give anaesthetic first to avoid being inhumane to the criminal being put to death.

In fact, a recent article in the Washington Post confirmed that an injection of potassium chloride can cause such pain and suffering in adults being executed that both an anesthetic and a paralytic are administered prior to the lethal substance. The author, an associate professor of anesthesia at Harvard Medical School, cautions that even these measures may only mask rather than prevent the “burning pain” of the administration of the poison.

It doesn't bear thinking about to be honest, and of course that's to the advantage of all those who oppose attempts to require the administration of pain relief in late-term abortion. We don't want to think about pain and suffering so we'll close our eyes to what's happening.

But as Carol Nolan said this week: "the latest medical evidence leaves us with the very disturbing possibility that every child subjected to a surgical abortion procedure after 12 weeks on these grounds not only has their life ended, but in a manner which could be subjecting them to horrific pain and suffering in the process."

"As human beings, and as legislators, we cannot stand by and ignore this," she said.

Eleven TDs, to their credit, are supporting the bill proposed by Deputy Nolan which they say is a compassionate and humane measure. Given what we know about the baby's ability to feel pain, no reasonable person would disagree with them.

Yet, as sure as the sun rises, a plethora of TDs will set their faces against this pain-relief bill. They will do everything they can to oppose the measure and may succeed.

Why? Why would any decent person oppose this bill? There is no medical or rational reason to dismiss the evidence that pain is being inflicted on a child, and to refuse a compassionate and humane measure to prevent that suffering. You'd want to have a heart of stone to refuse a baby pain relief in a late-term abortion,

There is, however, a political reason: the desire of abortion supporters, including many TDs, to avoid at all costs acknowledging the humanity of the little person being aborted - even if that means inflicting horrific, and preventable, pain and suffering.

Over the coming months we will see exactly where real compassion lies.