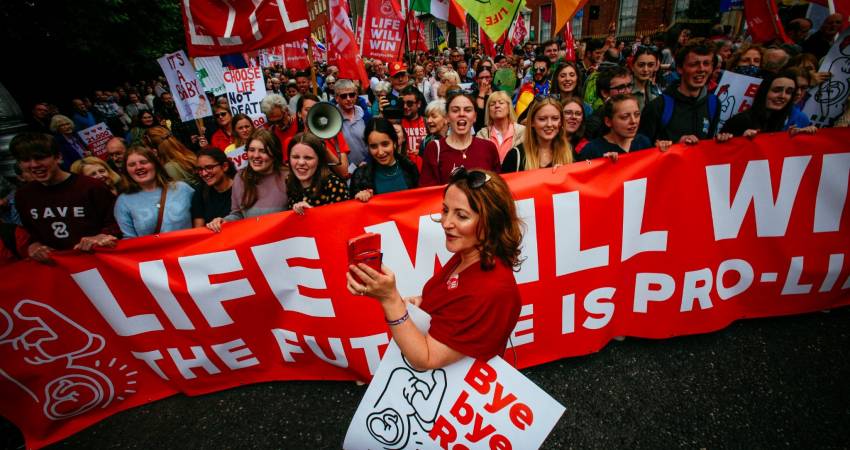 As the Rally for Life headed down O'Connell Street on July 2nd, the energy was palpable, visible and inspiring.

Amongst the thousands who packed the streets for the Rally were crowds of young people whose passion was infectious, and with them were thousands of families, sometimes representing three generations. Their witness was inspiring, not just because it showed the importance of the pro-life message, but because it demonstrated that the desire to protect unborn children endures, and will endure until we have rebuilt this broken culture.

The Rally, as I said that day, brought not just hope but that powerful, driving spirit of defiance.

My friend, Jonathon Van Maren, who will be with us in Ireland later this year, discussed the importance of defiance with me after the loss of the 8th amendment. Hope sustains us but defiance drives us forward, because we know that no law, no referendum, no vote can ever make it right to kill a helpess child.

So we marched in the Rally for Life not just in celebration of Life - and of Roe v Wade being overturned - but with defiance and hope in our hearts: for the right to life, for the courage to tell the truth, to reclaim the country that we love, for every baby, for every mother.

Because we are not for turning; because we will always stand for life, we will mend this broken culture.

As I drew on that tremendous energy at the Rally, I knew in my heart, though it may take decades, that Ireland that will turn once more to the values that sustained us once as a people - the values that told us to cherish every child equally, to love every mother and every child.

Roe v Wade is overturned not just because of the Supreme Court but because of the power of perseverance, the power of keeping the path lit and the flame alive - because of the unshakeable certainty that abortion has no place in a civilized society, in a society that claims compassion or mercy, and because, as surely as the arc of history bends towards justice, we will make abortion history.

And so we turn to the defiance that is needed when we know that an unjust law has no moral authority.

It is the defiance you showed when you come, with your families and your children, mothers, fathers, grannies, daideos, young and old, from every corner, with that strength in your heart that said: "we will not be silent, not now, not ever, as long as we live and breathe we will oppose abortion - and demand better for our mothers and babies".

It is the defiance that Pearse spoke of  - of the dream that we hold in our hearts, and that only the heart can hold.

Is the defiance we show to a political establishment which claims to support women - and then leaves the same women without any real choices - telling them instead to flush the little broken bodies of their unborn babies down the toilet.

21,000 babies have been flushed down the toilet if we are to believe that women followed the instructions of the HSE.

21,000 babies - thrown into this generation's equivalent of a septic tank. Yet the media is silent. For shame. Ireland can do better than this pitiless cruelty.

And we will. The Rally heard from the pro-life heroes who every day work on the frontline, who every day save a baby from the cruelty of abortion, who every day offer women hope and love and real support. Who build a better world rather than tearing it down.

They know that nothing in God's green earth is bettered by the killing of a child. They know that an Ireland that is truly compassionate will always offer a better answer than abortion.

From that love, and that hope and that defiance comes this promise: Roe has been overturned - Ireland will follow. No matter the battle, how ever hard the fight, Life will win.

So we said to Stephen Donnelly, on behalf of the 723,000 people who voted No, that we haven't gone away. That we will hold you to account. That we will not accept a so-called abortion review that whitewashes the devastation of 21,000 dead babies; that ignores the horror of late-term abortion happening in Ireland; that allows doctors - who should not be allowed to practise medicine by the way - to push frightened parents towards abortion when their babies has a disability.

We will not allow you to break your promise to reluctant Yes voters who you bullied into supporting Repeal with promises of safeguards and restrictions. The three day waiting period MUST STAY. We will hold you to that! The next months will see our Time to Think campaign rolled out in key constituencies and platforms and it will make the esential difference.