Against all the medical evidence and against the wishes of the people.  Our new Face the Nation campaign will call Fine Gael to account for breaking it's pro-life promise - and ensure that voters do not forget who legalised abortion in out country. It will also point out pro-life alternatives to voters. 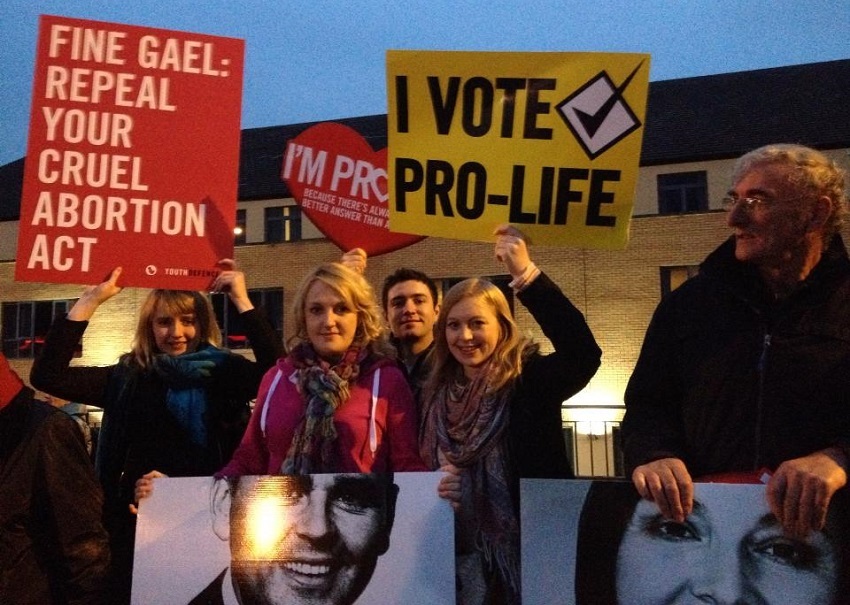 Great crowd right now outside the Fine Gael national conference protesting the abortion law. Together we will bring Ireland back to life.

200 people in Longford to tell ENDA to keep his pro-life promise. Media spin tried to blame pro-life people for a 'masked protest' at Enda's house later. This is entirely untrue. Debate the cruel and unacceptable Abortion Bill , and stop deflecting!

We must make sure that voters never forget what Fine Gael have done. We've designed a powerful reminder card for distribution in every constituency - pointing out that local TDs voted to legalise abortion until birth.

We're also sending 10,000 people this awareness-boosting pro-life sticker, so that the 'I vote pro-life' message continues to grow. Hopefully, that number will increase to 100,000 by the end of the campaign.

A series of high-profile public events will also call Fine Gael to account - and remind the public of the betrayal of Ireland's pro-life ethos. Abortion kills children and hurts women and Fine Gael ignored that evidence their rush to legalise abortion.

In Limerick on October 12th, more than 700 pro-life activists gathered to protest the first Fine Gael conference since the legislation was passed. Chants of 'Shame, Shame' and 'Repeal the Abortion Act' were heard clearly in the Fine Gael conference room, and the protest could be heard live on national television as Mr Kenny made his televised address.

Keep tuned for more of these pro-life actions as part of the Face the Nation campaign.

The campaign will also work to make the public aware of pro-life alternatives - such as the TDs and Senators who voted No to this cruel and horrific Abortion Act.  Alternatives are arising to politicians who break their electoral promises on matters of life and death.

In Limerick to protest Fine Gael's abortion bill. On our way to Belfast now to witness with Precious Life outside abortionists Marie Stopes.

Never. Give. Up. Hats off to the wonderful pro-life crew in Mayo.

We shall not yield. Mothers and babies deserve better than abortion, and this horrific Abortion Act shall be overturned.

For every mother and every baby, this is our promise: this cruel and horrific abortion law shall not stand.