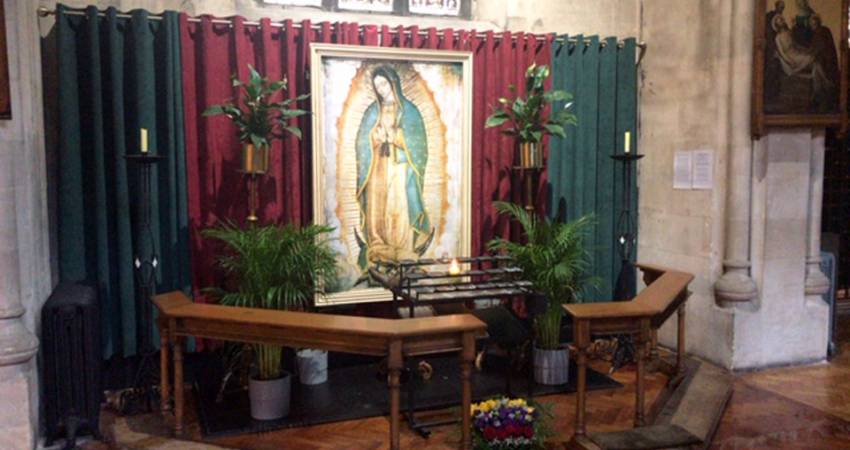 Altar in honour of Our Blessed Lady of Guadalupe erected in Savours Church, Dominic Street

Our Lady of Guadalupe was responsible for the conversion of Mexico to Catholicism  following on Her apparitions to a shepherd boy, Juan Diego, which started  on 1st December 1531. As a result Mexico became Catholic, thus snuffing out the practice of human sacrifice which was prevalent amongst the tribes of that country.

Some experts,  believe  that  Mexico was converted to Catholicism at that time, by Our Lady ,to compensate for the Protestant reformation initiated by Martin Luther King, at Wittenberg University in October 1517. Abortion is also  human sacrifice and is now  being carried out in the modern world. Zachary King, a former Satanist in America, who converted to Catholicism,has said that  he has “performed many satanic rituals in abortion clinics.” He also declared that “abortion is a blood sacrifice to the Devil.”

Because  Our Lady  appeared  in a  pregnant state, carrying the son of God, she is reverenced as the patroness of  unborn children. Scientists agree that the stars as displayed on her mantle  during one of her apparitions coincide exactly with their  position in the  constellations in the sky on Dec  1531.

In the Dominican Church, in Lr Dominick St, Dublin 1, there is a statue of  Mary. It is a statue showing her pregnant, carrying the Son of God. It is a holy place  in which we can venerate Our Lady, Patroness of the unborn, and to pray for both the unborn child and for those mothers who have or may be considering aborting God’s gift to them. It is in close proximity to the centre of the city, 5 minutes walk from  the ILAC Centre, and 10 minutes from  Henry St. The Luas red line goes past the front  door.  We urge you to make it a part of your visit to  the city centre.

This Church is a haven of peace and tranquillity. It is uplifting, reinvigorating and is a glorious opportunity to venerate Our Lady  in Her role as Patroness of the Unborn.